Note: This spoiler may be complicated but the movie revolves around 3 events all happening at 11:14 (the body drop, the genital severing and the hit and run). They are all ironically and darkly connected and this is about as easy as its gonna get to describe it. It’s a great film if you ever get to see it.

In summary, Cheri (Rachel Leigh Cook) isn’t actually pregnant and was just using the excuse to get her boyfriends to pay her, so that she could run off together with Jack (Henry Thomas). at 11:14, a body drops on Jacks car and he is subsequently arrested for murder (in the background we see Buzzy and Duffy fleeing the cop car when Jack makes a run for it). Tim (Stark Sands) finds Eddie’s (Ben Foster) severed penis after a hit-and-run and they drive him towards the hospital.

Explained version:
In order to get the money, one of her boyfriends, Duffy (Shawn Hatosy) had to fake a robbery with Buzzy (Hilary Swank) at the store they work at, including having to shoot Buzzy in the arm because she is a terrible liar. While he is doing this, Cheri shows up and steals Duffy’s bowling ball. Apparently, she was planning to frame Duffy for the accidental death of her last boyfriend, Aaron (Blake Heron). At the same time, Cheri’s father Frank (Patrick Swayze) finds Aaron’s body and drives to a bridge to dispose of it. When Cheri finally contacts Duffy after the robbery, she is fatally hit by Tim, Mark (Colin Hanks) and Eddie’s van. At this time, Eddie’s penis is severed by the car window when he was peeing out of the van. Tim is enlisted to help retrieve the penis. At 11:14 on the other side of town, Frank drops the body off the bridge and, as fate would have it, hits Jacks car. 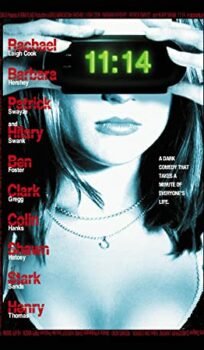