The ‘Rage’ virus is feared to have infected the entire planet. A message plays on radio saying that help for the uninfected is available in Manchester. Four survivors manage to get to Manchester. Jim (Cillian Murphy), Selena (Naomie Harris), Hannah (Megan Burns) and her dad Frank (Brendan Gleeson). Frank becomes infected, and is shot dead by a group of soilders. The soldiers take the other survivors into the safety of their heavily armed country house. Soon we see their true intentions: they aren’t working on a cure for the virus, but rather are hoping that the infection will die on its own, and planning on using the women to re-populate England. The soldiers send Jim away to be shot. Jim gets free and turns a rage-infected soldier loose on his former comrades. In the ensuing chaos, Jim frees Selena and Hannah, but is shot as the three of them escape. 28 days later, the last of the infected are seen dying of hunger. Jim, Selena and Hannah are making a sign that will be visible from the air. All three go outside to signal a passing reconnaissance plane, which is an indication that the UK was isolated in time, and that the disease did not spread to the rest of the world.

Also, beginning July 25, theaters in the US will be showing an alternate ending after the credits roll. In this version, discarded due to poor preview response, Jim doesn’t survive his gunshot wound. (Note that this ending is included in the UK DVD.)
Thanks, Neil S, and the many others who have sent this in the months since it was released in the UK, and before its wide US release. 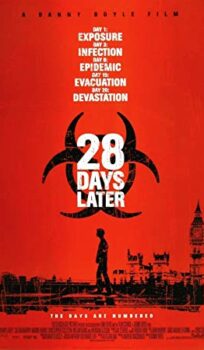