SHORT VERSION:
Koga has Rocky, Colt, Tum Tum, Miyo, and Mori all captured and brought to his headquarters, and he orders Mori to tell him where the cave of gold is hidden in exchange for no harm coming to the kids. Mori says that the cave is said to lie beneath Castle Hikone, and the special sword and dagger are the keys to open its door. Koga and his men take Mori to the castle, but the kids later manage to escape and follow Koga and Mori.

Koga and Mori find the cave of gold, but the men then do battle when Koga aims a revolver at Mori. The kids get into the cave and best all of Koga’s men, then they interrupt his and Mori’s fight, and Colt tosses a ball bearing into the barrel of the revolver to make it backfire and get destroyed. The blast starts a cave-in, and Mori convinces Koga to escape with them, saying that his life means more than gold. Once they get out, Rocky takes the dagger from the door, and Koga removes the sword and throws it into the cave before the door seals up so no one will be able to enter it again. Once outside, Koga thanks Mori for freeing him of all desire and leaves, and Mori gives Miyo the dagger after his grandsons tell him that she won the tournament.

Mori returns home with the boys so they can play with the Dragons in their baseball league’s championship game against the Mustangs, and with some help from Miyo, the Dragons win.

LONG VERSION:
Koga (Sab Shimono) and his men kidnap Rocky (Sean Fox), Colt (Max Elliott Slade), Tum Tum (Evan Bonifant), and Miyo (Caroline Junko King) and has them placed in a cell in his headquarters. Koga’s men then capture Mori (Victor Wong) and bring him there, too, and Koga shows him the kids and orders him to tell him where the fabled cave of gold is hidden in exchange for no harm coming to the kids. Mori says that, according to legend, the cave lies beneath Castle Hikone, and the special sword and dagger are the keys to open its door. Koga and his men promptly leave for the castle with Mori. A short time later, the boys and Miyo ingeniously escape their cell and fight their way through Koga’s forces all the way up to the roof, and they make use of some hang gliders there to escape to the castle.

The quartet follow Koga and Mori into the cave but soon run into Koga’s bodyguard Ishikawa (Killer Khan). They scream, which alerts Koga and Mori, and Koga sends his ninjas back to face them while he continues on with Mori. The two men find the gold in the form of gold carvings on a large wall, but Koga takes out a revolver and aims it at Mori. Mori fights back and they engage in a fierce battle. The kids make Ishikawa knock himself out, and then they fend off the enemy ninjas before they slide down a rocky pathway right into the room Koga and Mori are in and interrupt their fight.

Koga takes aim again with his revolver at all of them, but Colt – remembering Mori’s target practice training – throws a ball bearing into the barrel and makes the gun backfire and get destroyed, but the noise causes a cave-in. Mori convinces Koga to come with them, after getting him to understand that his life means more than acquiring the gold. After they all get out of the main door, Rocky takes the dagger from it, and Koga removes the sword and throws it into the cave before the door seals up so no one will be able to access the cave again.

Once outside, Koga calls off an approaching group of his ninjas and thanks Mori for helping him finally be free of all desire, then leaves without any further trouble. Mori commends both Miyo and his grandsons, and after they tell him that Miyo was the winner of the tournament, he gives her the dagger to keep until the next tournament takes place. The boys then return to the U.S. so they can play alongside the Dragons in their baseball league’s championship game against the Mustangs, and they show up just as their coach/father Sam (Alan McRae) is about to call a forfeit due to a lack of players on the team.

During the game, it is shown that Miyo had come along with Mori and the boys, after she reveals herself while preventing the Mustangs from scoring a home run. In the ninth inning, the Mustangs lead 4-2, and the Dragons are at bat, but they have two outs against them. The brothers are the next three batters, and Tum Tum and Rocky score hits and get on bases, leaving Colt as the final batter. After getting two strikes and a foul ball, Miyo gives him her bat, which has her name carved on it for luck, strength, and control. This, combined with the target practice training, enables Colt to get a home run and win the championship for the Dragons.

Angered over the Dragons’ victory, the Mustang player Darren (Scott Caudill) and his gang face off with the brothers and Miyo outside the field, and Colt offers a one-on-one fight with the best guy on Darren’s side against any one of them. Darren selects himself and then picks Miyo to fight against, since it was his home run that she ruined and he believes her to be a defenseless girl, but he quickly finds out the hard way that she is anything but. 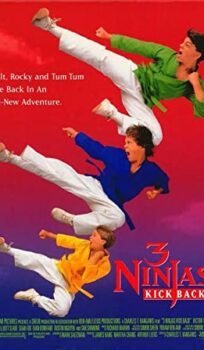