The day the Tiwoka tribe are having their hearing with the EPA at City Hall to discuss closing down Jack’s (Charles Napier) landfill site, Jack has the White Cobras biker gang kidnap Charlie’s (Donald L. Shanks) daughter Jo (Crystle Lightning) and gets Charlie to understand that Jo will be killed if he gives the EPA agent present his disk containing irrefutable proof of environmentally hazardous materials being dumped at the landfill. During a break from the hearing, Jack gives Charlie another disk containing old weather reports and tells him to give this to the agent and say that he made a mistake.

Rocky (Michael Treanor), Colt (Max Elliot Slade), and Tum Tum (Chad Power) – who were present during Jo’s capture – track down the biker gang to a ghost town, and after fighting their way through their ranks, they save Jo and take off to City Hall with her. One of the bikers phones Jack to let him know that the brothers have freed Jo and escaped, so he orders his goons to wait outside for them and prevent Jo from getting into the courtroom. The brothers fight their way through the goons and some corrupt cops and get Jo to Charlie before he can surrender the real disk to Jack in defeat. Jack then demands for Charlie to hand it over, but Charlie punches him and gives the disk to the EPA agent. Upon reviewing the data, the agent orders the landfill to be shut down permanently. Charlie, Jo, and the rest of the Tiwokas celebrate, and the brothers take a brief satisfied look at the tribe before departing.

As the brothers rest near a flower bed, Rocky thinks about Mori’s (Victor Wong) words about how they were helping people just so they could become heroes and how they have to be like the flower to become true ninjas, and then he watches a flower bloom. He realizes that flowers don’t want to show off how pretty they are; they just want to be pretty, so therefore he and his brothers should stop trying to show off just how good of ninjas they are and just be ninjas. After telling this to his brothers, they in turn tell Mori, and he hugs them for getting the message. 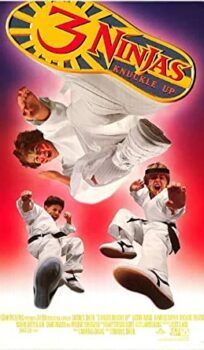