Major Pike (James Garner) is on the armed forces committee planning the imminent D-Day invasion in Normandy. He is kidnapped and drugged by the Germans, who have built an elaborate mock-up of an Allied hospital. They have also researched Pike’s entire life, forged letters from his father, put drops in his eyes to make him farsighted and left glasses on his night stand, faked photos with his “wife,” all to make him believe, when he awakes from the drug-induced sleep, that the war has been over for several years and that he is suffering from a form of amnesia. It is a risky plan, and the Nazi interrogator gives the doctor just 36 hours to learn what Pike knows before he will take Pike for his own methods.

The English-speaking Dr. Gerber (Rod Taylor) and the “nurse” (Eva Marie Saint) put Pike at ease, talking of their post-war friendships, and Pike slowly comes to believe it’s true, since his vision is that of an older man, his hair is graying, letters from his father recount a recovery from a heart attack suffered before Pike was kidnapped. The nurse is also Pikes’ “wife,” and she is very understanding and patient that he doesn’t remember her. It all fits, and Pike’s questions about the war are answered satisfactorily. Pike then refers to the committee thinking that it would have taken much longer to defeat Germany after NORMANDY, and the doctor now knows where the allies will invade.

Pike then realizes that he still has a paper cut on a finger, a tiny wound he sustained just before the kidnapping. He realizes that he has been duped and attempts to escape, unsuccessfully. He and Gerber go back and forth with trickery and misinformation, with Gerber trying to find out if the Normandy information was the truth or misdirection.

The Nazi interrogator is eager for any credit to be given for correct information but doesn’t believe that Normandy is the real invasion point, and plans to have Gerber’s operation shut down. Gerber, who has come to respect Pike, helps him escape; Gerber takes his own life before the Nazi can kill him. Pike also takes nurse Anna, who was treated brutally in a concentration camp before being recruited to Gerber’s hospital. A few locals help them on their way, and they make it to the US embassy, where they part… but are likely to see each other again some day. 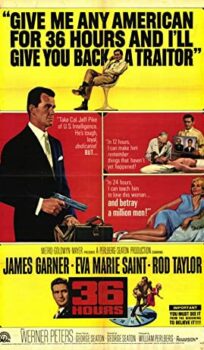