James and Amy (Nick Stahl and Mia Kirshner) start having weird things happen at their home, like unusual CDs showing up in the car, and other small things that can be passed off as forgetfulness, jokes, etc. Eventually Amy vanishes and no one believes James that something funny is going on. Even Amy’s sister thinks he’s responsible for her disappearance, the police figure she’s just taken off as she left a note and yet there is continued weirdness. More music, a “fake” cat, dead cat parts, and finally a video of Amy tied up.

James is sure a guy he bullied in high school is responsible and first tries to befriend him and eventually in a rage, kills him trying to find Amy and buries the body. Finally he’s getting close when he realizes the culprit is in his house and he nearly catches him, but gets his car/license. He contacts the baddie and says bring my wife home or I’ll go to the police. The next day at work there is a sudden video of his wife sleeping in bed, he leaves work and races out to find her. He can’t find her at home (meanwhile simultaneously the sister brings the police sure that her BIL is holding Amy captive or something). After finding Amy dead in the garage, he grabs a gun and goes upstairs and the culprit reveals he can see him and has a camera in the bedroom (and elsewhere). As this is happening, the sister, husband and cop are running around the main floor screaming for Amy.

James runs downstairs (still seemingly oblivious to the cop) determined to get the guy who is obviously nearby. As the sister finds the dead woman and starts screaming, the cops yell at him to put the gun down and James starts with the usual “but he’s out there” explanation and the cop shoots him.

This is followed by the voyeur shutting down all the cameras at the house and burning everything on a CD and putting it on a shelf with a bunch of other random street addresses. Then they show him sitting in a new neighborhood watching a house with a family, evidently preparing to make them his next victim. 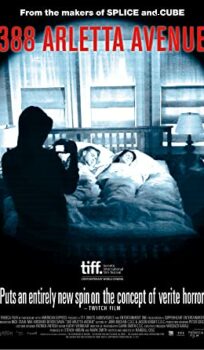