Harry Mitchell (Roy Scheider) is happily married to Barbara Mitchell (Ann Margret).  However, he has met an exotic dancer named Cini (Kelly Preston) and has had an affair.

One day, Harry gets a video of the affair from scumbags Alan Raimy (John Glover), Bobby Shy (Clarence Williams III), and Leo Franks (Robert Trebor).  They are demanding $10,000 to keep quiet.  He fights back by telling his wife about the affair and refusing to pay.

Alan breaks into Harry’s house and steals his gun and a dressy jacket.  They abduct Harry and show him another video of Cini being shot to death with Harry’s gun, and her blood splattering on Harry’s jacket.  Now they want $100,000 or the evidence will go to the cops.  They give him a few days to come up with the money.

Harry visits just Alan, and lets him look at a financial book of his business, revealing that he doesn’t have that kind of money but can pay it in installments.  He convinces Bobby and Leo that he can pay Alan in full, and then when Alan repeats the installment scenario, they assume he’s planning a double cross.

Meanwhile, Alan convinces Bobby that the money would split better two ways so he gets Bobby to shoot Leo.  After this, Alan kills Bobby and then abducts Barbara.  He tells Harry that he wants the money and his restored antique car that he noticed earlier.  So, Harry meets him on a bridge just outside of town and gives him the money and the keys to the car.  Alan plans on killing Harry and Barbara, but Harry tells him that his financial book has Alan’s fingerprints all over it and his lawyer was told to turn it over to the cops if he doesn’t report back.  Not wanting trouble with the cops, Alan lets them leave, and as he starts up the car, the doors lock and a tape recording of Harry comes on to tell Alan that he better enjoy the last 10 seconds of his life.  Then Alan tries in vain to get out of the car before it blows up, killing him. 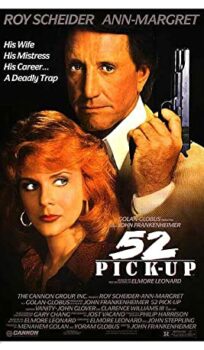