SHORT VERSION: Ross becomes a star bowler, but he lets the fame and fortune go to his head and his attitude causes Lindsay to dump him and him to snub Mike. A fifteen-tournament losing streak then follows, and at the Portland Nationals, he is told that he must win it or he will hit rock bottom as a pro bowler. He ends up throwing the game to his foe Jerry Lowry, after he thinks about Lindsay and Mike before throwing his last ball and realizes that having them in his life matters more than being a bowling star.

He easily patches things up with Mike and finds him the gal from the Bowling Ballers swingers club that he had a mutual attraction to, but his attempts at reconciling with Lindsay prove to be much harder. However, he ultimately wins her back after he shows her that he has bought the pet store she has been trying to save from demolition and then gives her ownership of it.

LONG VERSION:
Ross (Ross Patterson) gains fame and fortune on the professional bowling circuit as Ro$$ Vega$, but unfortunately, he lets it all go to his head, and he also starts paying more attention to the PBA Tour publicist Diane (Robyn Lively) than to either Lindsay (Tara Reid) or Mike (Clayne Crawford). One night at an after-party showcasing Ross’ new line of bowling wear, Lindsay tells Ross that they are through, having had enough of his attitude and how he has continued with bowling long after they have acquired enough money. Later on, he ditches Mike after he too voices his displeasure over his bad behavior.

A month later, Ross’ ego has grown even larger, and this has caused him to let his game go down the tubes, resulting in him losing fifteen straight events and allowing his rival Jerry Lowry (Rob Huebel) to reap all the benefits. Diane tells Ross that the upcoming Portland Nationals is the last tournament of the year, and if he doesn’t win it, he’ll lose his sponsors and officially hit rock bottom as a pro bowler. She also tells him that she has just been promoted to sideline reporter for college football games, and had been using him all this time to land a bigger job in the sports industry.

Ross is matched against Jerry in the finals, and the score is even up until the last frame. Jerry manages to knock nine pins down, and Ross knocks down eight, with the remaining two located on each end of the lane, meaning that Ross must make a 7-10 split to win (made all the more difficult by the fact that this is his second straight attempt at a 7-10 split, having scored his first one ever on the previous frame). As Ross is preparing to throw the ball, he sees Diane chatting it up with some executive types and begins to think about Lindsay and Mike. He throws the ball, but it goes between the pins and gives Jerry the victory. As Jerry is celebrating, a fan comes up to Ross for his autograph and mentions that he and Lindsay are the reasons that she and her friends go bowling.

Ross chats with PBA Commissioner Buddy Kendrick (Ray Wise) afterward, during which it is revealed that Ross had deliberately thrown the game on that last ball. Buddy tells Ross that celebrities, no matter what the profession, do not have real lives; their success is just a trade-off for family, friends, and somebody to love. Lindsay didn’t want to make that sacrifice, and he knows that Ross knows now that he didn’t really want to, either. Ross thanks him and returns to Los Angeles.

Ross quickly patches things up with Mike, but his attempts at winning back Lindsay prove to be much harder. He ultimately wins her back when he has her brought to the pet store she has been trying to save from demolition and tells her that he has bought it for her and that she owns it now. He also shows Mike that he has found the gal from the Bowling Ballers swingers club that he had a mutual attraction to, and she pulls up in her car outside. Before Mike takes off with her, he and Ross agree to go bowling later, but this time for fun. 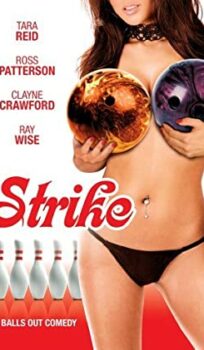