Pooper:
Sonny’s actions end up saving C’s life, but Sonny is killed by the son of the man he murdered at the beginning before C can reconcile with him. Unlike Sonny’s prediction that he would die unloved, C genuinely mourns Sonny’s passing, as does C’s father and the man Sonny saved at the beginning of the film. C and his father reconcile, and he carries the lessons of both Sonny and his father throughout the rest of his life.

Long Ending:
Young Calogero (Francis Capra) lives in the Bronx in the 1950s. He has a strong family unit, led by his bus-driver father Lorenzo (Robert De Niro). Though Lorenzo is poor, he is well-respected within the Bronx community and is a stern, but loving, father who expects Calogero to rise to his talent. One day, Calogero witnesses local mafia boss Sonny (Chaz Palminteri) shoot a man in the street. The shooting occurred when two cars got into a traffic accident, and the man Sonny shot had taken out a baseball bat and was trying to beat the other man involved in the accident. The police ask Calogero to identify Sonny as the shooter, but Calogero decides not to do so. In gratitude to Calogero’s decision to spare him, Sonny initially tries to give Lorenzo some jobs, though Lorenzo refuses to work for Sonny. Instead, Sonny begins to bond with Calogero despite Lorenzo forbidding such a relationship.

We jump ahead into the 60s, where Calogero (now nicknamed “C” by Sonny, and portrayed by Lillo Brancato) is a teenager. He now takes after (and relates) more to Sonny than Lorenzo. We learn that Sonny is relatively benevolent and cool-headed, treating his associates well and generally resorting to violence as a last resort. Sonny views C as a son, and like Lorenzo, tells him to study hard and not get caught up in the mafia. Sonny states that living his lifestyle is tough, as people fear him and that, when he dies, nobody will mourn his passing. Further, racial tension has flared in Sonny’s neighborhood as the schools are being forcibly desegregated. C’s best friend Slick seems to be the most hateful towards african-americans. Sonny disapproves of C’s friends, saying they are worthless and will only get C in trouble.

Eventually, C falls head over heals for an african american girl named Jane (Taral Hicks). Though Lorenzo disapproves of an interracial relationship, Sonny thinks love knows no color and says Jane could be one of the “great ones.” C eventually asks her out, and Sonny even agrees to loan C his Cadillac for the date. Before the date, however, Slick and C’s friends launch an unprovoked attack on some african-americans that are biking through the neighborhood. C doesn’t participate in the beatings, but witnesses them and is also unable to prevent them. Further, before he goes on his date, Lorenzo says that C is a fool to trust Sonny as Sonny doesn’t really care about him. C storms out of the house, angry at his father.

C goes to pick up Jane, but Jane has brought her brother who was one of the kids beaten up by C’s friends. The brother, though knowing that C didn’t participate in the beating, tells Jane that C beat him up anyways. C loses his temper and uses the “N” word, causing Jane to leave with her brother and C to regret his actions. When C returns the Cadillac to Sonny, Sonny discovers that a bomb has been placed under the hood, but was defective and failed to go off. Though C had nothing to do with it, Sonny angrily pins him against the wall and accuses C of setting him up. C cries, saying he views Sonny as a second father and then runs off, thinking that what his dad said about Sonny was true. Lorenzo, having witnessed Sonny threaten his son, confronts Sonny and gets knocked around for his troubles. Meanwhile, C’s friends, led by Slick, pull up in a car. They have  a case of Molotov cocktails and plan to drive into the black neighborhood and firebomb them. C, against his better judgment, gets in the car, feeling abandoned by everyone he loves.

Sonny regrets how he acted, and drives after C when he learns who he is with. Sonny catches up and forces C out of the car, while warning Slick and the others to leave C alone. C is still angry at Sonny, but is told that Jane was looking for him in the neighborhood. They drop C off and he runs after Jane. She reveals that her brother admitted he lied about C’s role in the earlier beatings, and C also apologizes profusely to her. They finally kiss and hold hands. Then, C remembers that Jane’s brother is in danger and the two drive off to the black neighborhood to try to warn them about Slick and company.

When they arrive, they find it is too late and Slick’s friends had firebombed a record store. One of the victims, however, managed to grab a molotov and throw it back into Slick’s car, which exploded and killed everyone inside. Luckily Jane’s brother is ok, and C realizes that Sonny had saved him (and always protected him from) Slick’s fate. The bystanders begin to shout at and threaten C, and he and Jane realize their relationship can’t work so long as there is so much hate between the races. C runs back to his neighborhood, and wants to thank Sonny for saving his life and steering him right, but when he arrives at Sonny’s bar, Sonny is fatally shot by a kid C’s age.

It turns out the assassin is the child of the man Sonny killed at the beginning of the film. Most people do not truly mourn Sonny’s passing, but C is a true mourner. While praying before Sonny’s body, Lorenzo arrives and mourns with C, and the two make amends with each other. Also, the man who had been attacked (cameo by Joe Pesci) by the man Sonny killed also arrives and mourns with C. He says that Sonny saved his life by shooting the man with the baseball bat, and that the argument was over more than a parking space (though he doesn’t reveal what the dispute was truly about). The man has been friends with Sonny ever since, and promises to provide for C on Sonny’s behalf. C finally leaves the funeral, reflecting that Sonny never rose up to fulfill his talent, but glad that he had Sonny and Lorenzo always demanding that he live up to his. C essentially vows to make both his “fathers” proud. 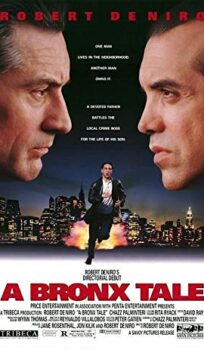