Pooper:
Ultimately, Carter embraces his dysfunctional family, role as a poster child of A.C.O.D., and appears to re-ignite his romance with Lauren.

Long Ending:
Carter (Adam Scott) is an A.C.O.D. – Adult Child of Divorce. His parents, Melissa (Catherine O’Hara) and Hugh (Richard Jenkins), had an acrimonious divorce and have been at each other’s throats ever since. Both are remarried and Carter’s step-mother Sondra (Amy Poehler) is almost the same age and owns the restaurant he works at. Carter continues to see his childhood psychological researcher Judith (Jane Lynch), who wrote a book chronicling the experiences of Carter and other patients. He also is in a long-term relationship with his preternaturally patient and wise girlfriend, Lauren (Mary Elizabeth Winstead).

Carter’s younger brother Trey (Clark Duke) gets engaged to his girlfriend Kieko (Valerie Tian) and asks Carter to convince their parents to agree to attend their wedding (the parents have refused to be in the same room since the divorce). Carter tricks the pair to attend a dinner together to talk out their differences. The next morning, he walks into Hugh’s house to find his parents having sex (and thus, cheating on their respective spouses). When he tells Dr. Judith, she decides to write a new book focused on adult children of divorce, with Carter at the center of the book.

His parents’ renewed relationship and Dr. Judith’s scrutiny sends Carter into a tailspin. He makes out with Michelle (Jessica Alba), another former patient of Dr. Judith. He fails to keep his parents’ affair a secret, causing Sondra to divorce and sell the restaurant (and leading to his half-siblings to also now have divorced parents). Melissa’s husband also divorces her (and he was very paternal to Carter and Trey). Carter causes a scene at a rehearsal dinner with Kieko’s parents. He cuts off his relationship with Dr. Judith. And his bad decisions culminate in an ill-advised public attempt to propose to Lauren, who turns down his proposal to “make it official.”

Carter drives to his old family cabin. He has been lead to believe the cabin hasn’t been used for years. However, upon arrival, he finds Melissa’s ex-husband there (who confesses that he and Melissa used the cabin all the time). Melissa, Hugh, Trey and Kieko then show up for a weekend together that Carter was not invited to as he “quit” being their family. Sondra also shows up after the family accidentally sets off a security alarm that notifies her of people using the cabin (and reveals she and Hugh had also been visiting often). In the ensuing squabbles, the cabin is accidentally burned to the ground. But Carter appears to have come to peace with his family.

We jump ahead to where Dr. Judith is introducing her new book on A.C.O.D.  at a book signing event, with Carter onstage alongside her. He finds Lauren in attendance and the two talk and appear to reconcile. The film then jumps ahead one year where Carter, Trey, and Hugh are wearing tuxedos outside of a church. Hugh tells the kids a story about when he was truly happy and then says he has been truly happy ten times in his life. The trio are approached by an attendant from the Church and told that it is “time” and the they walk inside. It is unclear which of them (or if all of them) are getting married. 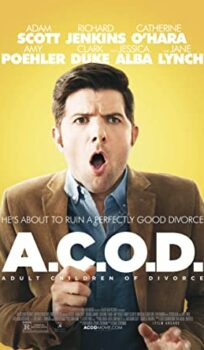