Goofy finds out his son Max changed the destination plans from Lake Destiny, Idaho to Los Angeles, and when Max tells him to go the Los Angeles way he is miffed about it. They have a heated argument that ends with their car going into a river. They eventually reconcile while their car drifts in the water, and Max explains his dilemma to his father, about lying to Roxanne that Goofy knew Powerline (singing voice provided by Tevin Campbell) and that he made a preposterous promise to her that he would be on TV dancing with Powerline during his final number at his concert in Los Angeles. Goofy decides to help his son out by getting him on stage with Powerline by any means necessary.

However, they go over a waterfall, Max managing to become tied up in their tent which becomes a makeshift parachute while Goofy is hanging on by the handle of Max’s fishing rod. The handle comes off, and Goofy begins to plummet down into the foam below. Max executes the Perfect Cast with the pole, hooking Goofy by the pants, and pulls him up. Goofy, extremely pleased with his son executing the Perfect Cast, hugs him and sheds a tear of joy.

They get to the Powerline concert, and despite some backstage mishaps, Goofy and Max manage to make it on stage and dance with Powerline, while Roxanne watches at Stacey’s house with a smile on her face. Her friend Stacey and Max’s friend Bobby also look like they might hit it off, too.

Max & Goofy return to Spoonerville and stop outside Roxanne’s house, doing so because although Max managed to make good on his promise to her, he wanted to tell her the truth. Though she initially thought his dancing with Powerline was great, Max tells her he never knew Powerline before the concert, and that he only made up the story because he wanted her to like him. Roxanne tells him she already liked him ever since she heard him laugh (like Goofy). They arrange a date together, and Max kisses her.

Meanwhile, Goofy tries to re-attach the bumper to his wreck of a car, but the car suddenly blows up, launching Goofy into the air and sending him crashing through the roof of Roxanne’s porch. Max happily introduces Roxanne to him. 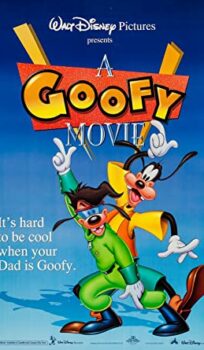