After Calvin (Thomas Ian Nicholas) helps King Arthur (Joss Ackland) save Princess Katey (Paloma Baeza) from Lord Belasco’s (Art Malik) fortress (Princess Sarah [Kate Winslet] told them that Belasco had his men kidnap Katey to force her to marry him, and he threatened to kill Katey if she didn’t comply), Arthur knights him and makes him the first Knight of the Round Table. Upon their return to Camelot, Arthur briefly confronts Belasco, but he allows him to walk away. Calvin protests, but Arthur explains to him that the people still believe him (Arthur) to be a coward, and the guards were still loyal to Belasco, so they would have to bide their time and wait for the right moment to nail him.

At the jousting tournament where the winner will get Sarah’s hand in marriage, Arthur addresses his people, telling them that he will fail them no longer, and he opens the tournament to all free men. He did this to allow Master Kane (Daniel Craig), who was in love with Sarah (and she with him), to participate. Kane and Belasco make it to the finals, and in their match, Belasco hits Kane hard, but fails to unhorse him. After Sarah runs away, seemingly in despair, Calvin goes to check on Kane. After seeing that he is too dazed to continue, Calvin dresses up as him, and then unhorses Belasco to win the tournament. When he reveals himself soon after, Belasco tries to kill him, but the Black Knight shows up and saves him. Arthur proclaims Calvin the winner, but Calvin says that the Black Knight is the real knight here. The Knight then reveals herself to be Sarah, and a pleased Arthur says she can choose her own husband. She and Kane then kiss, and Arthur banishes Belasco from his kingdom forever. Later, Calvin is sent back to his own time by Merlin (Ron Moody), and he bids Arthur and Katey farewell before he goes.

He is taken back to the moment in the baseball game before he went up to bat, and this time around, he confidently hits a home run. After reaching home plate, one of the runners takes off her helmet and reveals herself to be Katey, and Arthur is shown in the stands. 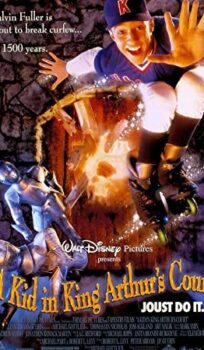