After J.J. (Aaron Paul) admits he lied about having caner and he and Martin (Pierce Brosnon) get in a fight, the four split up and go their separate ways. However one night Maureen’s (Toni Collette) disabled son, whom she looks after, has a heart attack and is rushed to the hospital.

Maureen is touched when Martin shows up at the hospital. Jess (Imogen Poots) also arrives with her father, and their relationship seems to be on the mend. Maureen’s son pulls through and the doctor reminds Maureen that her son probably cares for her and would be as devastated to lose her as she was to nearly lose him.

The others wonder why J.J. didn’t show, but Jess suddenly remembers that it’s Valentine’s Day meaning that the pact is now over and J.J. is probably not at the hospital because he has decided to end his life. The three go searching for him and find him on top of the building where they first all met.

J.J. admits he doesn’t know why he wants to kill himself, he’s just tired of living. He argues that the others have it easy because their problems can all be fixed but his can’t. The other three manage to talk him down saying that things have changed for all four of them and that they’re a team now.

Time skips forward to New Year’s Eve. The four are all video chatting with each other. Martin is at home with his little girl, taking time to be a father. Maureen is throwing a New Year’s Eve party at her house (and possibly may be starting a relationship with her son’s doctor) and Jess and J.J. are are dating. 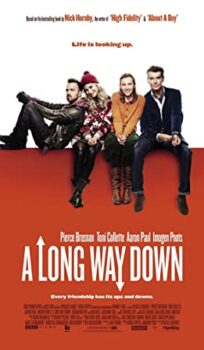