Pooper:
Albert decides he doesn’t want Louise back and instead loves Anna. He defeats/ kills Anna’s husband Clinch, by shooting him in the arm with a venom covered bullet. The film ends with Anna and Albert walking away together. During and after the credits the character Django from Django Unchained makes a cameo and shoots a racist shooting game at the fair.

Longer Version:
Albert (Seth Macfarlane) is desperate to get his ex-girlfriend Louise (Amanda Seyfried) back. An outlaw called Clinch (Liam Neeson) sends his wife Anna (Charlize Theron) into Albert’s town while he runs an errand. After Albert saves Anna in a bar fight, they become friends and she helps him try to get Louise back. Albert challenges Louise’s boyfriend Foy (Neil Patrick Harris) to a gunfight but Albert forfeits because he realizes he loves Anna instead. Meanwhile, one of Clinch’s henchmen sees Anna and Albert kissing. Clinch goes into town, takes Anna hostage and challenges Albert to a gunfight. Albert initially runs away but returns after meeting Native Americans and having a drug fueled vision of Anna. He defeats and kills Clinch by shooting him with a venom covered bullet. Anna and Albert walk away together. During and after the credits Jamie Foxx makes a cameo as his character Django from Django unchained and shoots down an extremely racist shooting game at the fair. 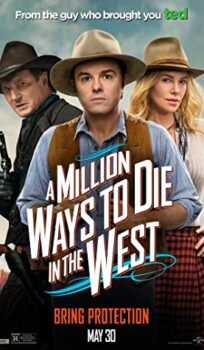