POOPER:
Nancy finally defeats Freddy by convincing herself that he doesn’t exist. Since that is the only source of power Freddy lives by, he fades away. As the movie ends, Nancy’s friends are all alive again, and she gets in the car with them. Her mother, Marge waves them goodbye. Their car suddenly falls under control of Freddy and speeds off. Margaret is then pulled through the window of the door by Freddy.

We next meet Tina Gray (Amanda Wyss) being stalked and assaulted by a creepy figure in a creepy warehouse. As the figure slashes at her with his clawed glove-hand, she screams… and wakes up from her nightmare. We notice, however, that her nightshirt has been shredded. Later she invites her best friend Nancy Thompson (Heather Langenkamp) and Nancy’s boyfriend Glen Lantz (Johnny Depp, in his first major role) to spend the night at her place while her mom is out of town. All three have been sharing the dream of the vicious clawed man in a red and green sweater. Her on-again/off-again boyfriend and town rebel Rod Lane (Jsu Garcia) shows up and he and Tina have sex, while Nancy rejects Glen’s advances. Right before falling to sleep, Rod also admits to Tina he has been haunted by the man in his sleep too. As Tina sleeps she is once-again stalked and brutally killed by the dream man – and she also dies in real life of the same injuries inflicted on her in her dream.

The police are called and a search for Rod begins. He is eventually arrested, though he protests that he is innocence. In private, he admits to Nancy that he wishes he had been able to protect Tina from the man in their dreams. Meanwhile, Tina’s dreams get more and more violent, and she notices the injures she suffers in them appear on her body in her awake state. She begins reading about homemade military traps. Meanwhile, her divorced parents – police Lt. Donald (John Saxon) and her mother Marge (Ronee Blakley) – share knowing glances with each other. Her mom, an alcoholic, also begins drinking heavily.

One night, Heather asks Glen to watch over her as she sleeps (he has climbed in through the bedroom window). In her dream, she sees the dream-man standing over Rod, and then the man violently attacks her. Glen too has fallen asleep, so cannot wake her, but eventually  she is awoken by her alarm. She and Glen rush to the police station and demand to visit Rod, but when they check his cell, he is found hanging dead in his cell. Later, Glen tells Nancy about a theory by ancient people that you can just turn your back on dreams and destroy your nightmares.

Nancy continues to have troubled sleep, and Marge takes her to a sleep research center so she can be monitored. Freddy again attacks her in her dreams, and the research staff forces her awake. She has cuts on her arm, and they also find the man’s fedora in Nancy’s bed. Nancy had grabbed it off the man’s head, and it turns out that if she awakens while in contact with anything from the dreamworld, it will follow her into the real world. Inside the hat is the name of her assailant, Freddy Krueger (Robert Englund). Her drunken mom later breaks down and says that Freddy can’t hurt Nancy, because Freddy is dead. Freddy had been a child murderer, killing up to twenty children in an abandoned warehouse. He was found not-guilty on a legal technicality (mis-executed search warrant) so all the parents in the town chased Freddy to his warehouse and burned it down with Freddy inside. Marge has kept Freddy’s bladed glove hidden in the basement ever since. Marge also places bars on all the windows and doors of their house to keep Nancy “safe.”

After staying awake for an entire week, Nancy decides she has to know if her dreams are real or if she’s crazy. She forms a plan where she will grab on to Freddy in her dream, have Glen wake her up, and the two will knock him out. Unfortunately, Glen falls asleep before they meet and is killed bloodily by Freddy. Realizing it is up to her, Nancy sets an alarm and asks her dad who is investigating Glen’s crime scene across the street to come to the house in twenty minutes to arrest Freddy. Lt. Donald obviously is skeptical, but does ask one of his officers to stand watch outside her house. Nancy also sets up various home-built booby traps before going to sleep. Nancy fights Freddy in the dreamworld, and holds on to him, but when she awakens, he isn’t there. She thinks she is crazy when Freddy crawls out from under her bed. She screams for help, and the officer runs off to get Lt. Donald and backup. Freddy is hurt, but not defeated by the booby traps. Nancy eventually sprays him with gasoline and lights him on fire as the police bash down the door. Lt. Donald and Nancy see fiery footprints leading upstairs, and when they kick in the bedroom door, they see the still afire Freddy ravaging Nancy’s mom on the bed. Freddy and Marge then sink into a dark pit that formed within the bed, both seemingly dead.

Lt Donald finally believes his daughter, and she asks him to check the rest of the house. As she goes to leave the room, Freddy re-materializes. Nancy says she is aware she is still there, and as he lunges to attack she turns her back and refuses to believe in him anymore. Without her belief, Freddy loses his power and disintegrates.

Then, Nancy wakes up. It turns out the entire thing was a dream. Glen, Rod, and Tina drive up in Glen’s convertible to take her to school, while her mom stands at the door waving goodbye. Nancy hops in the car, but then the doors lock, the windows rise, and the roof unfolds (the roof colors match the colors of Freddy’s sweater). The four teens scream as the car drives off, and a clawed hand breaks through the window in the door, grabs Marge, and drags her into the now dark house, with Freddy’s deep laughter echoing over the scene.

Originally, director/writer Wes Craven did not want any sequels. In the original ending, everything really was a dream and Nancy and her friends drive off happily to school. In any event, it turns out that Nancy lives to fight Freddy another day in Nightmare on Elm Street 3, and Freddy assaults the actress who played Nancy in the meta-filled sequel A New Nightmare (Nightmare on Elm Street 7). 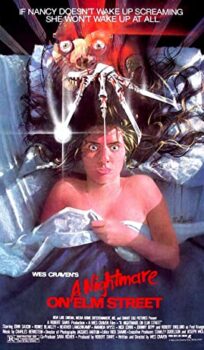