POOPER
Philip shoots Butch with his own gun, but later apologizes for doing so. Philip is reunited with his mother, who promises Butch she will let him out into the world more often and to enjoy what life has to offer. When Butch is handing Philip the postcard, Bobby Lee shoots him, thinking he’s going for a weapon. Butch dies, and both Red and Sally punch out Bobby Lee.

LONG VERSION
Set in Texas on Halloween night 1963, just a few weeks before JFK’s fateful visit, inmates Butch Haynes (Kevin Costner) and Terry Pugh (Keith Szarabajka) escape from the prison in Huntsville, stealing a guard’s car and taking him hostage. Terry kills the guard and stuffs him in the trunk, so they drive into town looking for a different car or a hideout and end up at the home of a single mother and her three children. They decide they need a new hostage to help with their escape, so Butch and Terry take her 8-year-old son Philip (T.J. Lowther). The noise draws the attention of a neighbor carrying a rifle, but Butch tells him not to shoot in fear of hitting the boy. He agrees and the trio drive off as the sun starts to rise. Terry is slapping around Philip, so Butch takes his gun away and gives it to Philip. While Butch is getting supplies from a general store, Terry tries to molest Philip. This angers Butch, who takes the gun from Philip and kills Terry. Butch and Philip then drive off, still with the guard’s car.

Meanwhile, Texas Ranger Red Garnett (Clint Eastwood) has been put in charge of finding the escapees. He is given the governor’s airstream trailer to work out of, as well as two helpers. They are criminologist Sally Gerber (Laura Dern) and FBI agent Bobby Lee (Bradley Whitford). Red is reluctant to allow a woman to accompany him, but her knowledge of criminal behavior, especially once they learn about the young hostage, places her in Red’s good graces. Red tells Sally that he has a personal interest in Butch Haynes. Red was a sheriff when he arrested a young Butch for stealing a car. Since it was his first offense, he was only going to let a slap on the wrist. But Red knew that Butch’s father was a criminal and was afraid returning him home would turn him into a career criminal, so he told the judge to send him to a juvenile prison to escape that fate. However, it was his time at the prison that turned Butch into a criminal, and Red hopes to catch Butch alive to make up for that mistake. But that is called into question when the trio find Terry’s dead body, and they now know that Butch is a killer. Later, they go to a farm where Butch stole another car, and it’s at that time they find the body of the dead prison guard. At this time, Red notifies all law enforcement not to shoot Butch for fear of killing the boy by mistake.

As Butch and Philip travel through the Panhandle towards Oklahoma, they begin to bond over RC Cola and absent fathers, and Butch even starts to call him Buzz. Since his mother is a Jehovah’s Witness, Philip isn’t allowed any indulgences, nor is he allowed to participate in trivial things like trick or treating. Philip is beginning to see Butch as a father, and is enjoying his new-found independence. Since Philip wasn’t wearing any pants when he was taken, Butch goes to a department store to get him some pants, as well as some rope and duct tape. Philip sees a leftover Casper the Friendly Ghost Halloween costume, so he shoplifts it. The store manager recognizes Butch from the news reports, but Butch threatens him when he tries to call the police. However, a pair of passing policemen recognizes the stolen car parked next to the store and call for backup. Butch is able to get away from them and he and Philip, still with the Casper costume, take off. Red learns of what happened and they head to the store, along with several state policemen. On their way there, the trio come across a man and a boy in a car, but they cannot identify the driver. Sally then sees the boy wearing a Casper costume and immediately realizes it’s Butch and Philip. They give chase, but Butch easily gets away from the trailer, causing it to crash in the process.

The highway Butch is taking is unfinished, so he and Philip are forced to take country roads, which take them into small towns and near farms. Over the next couple of hours, Butch and Philip encounter several people and families to help in their escape. Using his charm (and gun), Butch is able to get past roadblocks and acquire new getaway vehicles. He even teaches Philip, still wearing the Casper costume, how to trick or treat, even though Halloween was yesterday. When the woman who answered the door sees Butch’s gun, she not only gives him leftover candy, but her money as well. Butch tells Philip that the ultimate goal is to go to Alaska. Butch is carrying a postcard his father sent him from there years earlier, saying he would like to meet his son there one day. That night they stop at a farm. They are able to get along with the family that lives there, but that changes when the man beats his grandson. Butch begrudgingly puts up with it until the next morning, when the family learns from the news who Butch and Philip are. Butch then ties them up and plans to kill the man for hitting the boy, but Philip, beginning to tire of Butch’s increasingly hostile temper, takes the gun and points it at him. He accidentally pulls the trigger, shooting Butch in the stomach. Philip then takes off into the nearby field, throwing the gun into a well. Since he also took the car keys, Butch is forced to chase after him. After he leaves, the family is able to break free and calls the police. Butch follows Philip and catches up to him at a tree he climbed. A crying Philip apologizes for shooting Butch, but he tells him that it was the right thing to do.

The police arrive, followed by Red, Sally, and Bobby Lee. By this time, Philip’s mother has joined the trio and is there as well. Using a megaphone, Red negotiates with Butch to let the boy go and to surrender. Butch says he still has a gun and threatens to kill Philip unless his mother agrees to let him out into the world more often and enjoy what life has to offer. She agrees and Butch gives Philip the money from the woman and tells him to go to his mother. He starts to, then returns to Butch because he is afraid he is going to be killed. Red then goes out into the field, without his gun, and tells Butch to drop his weapon. Butch tells Red he doesn’t have the gun anymore and is ready to surrender. He asks Red if they know each other, since he looks familiar, but Red says no. Butch wants to give his father’s postcard to Philip, but when he reaches into his pocket to get it, Bobby Lee, thinking it was a weapon, shoots Butch in the chest with his high-powered rifle. As he lays dying, Butch gives Philip the postcard and they say their goodbyes. Red, furious that he has lost his chance to make things up to Butch and take him alive, punches out Bobby Lee. Sally, who had been putting up with him hitting on her the entire time in the trailer, hits Bobby Lee as well. The movie ends with Butch dying in the field at the same time Philip is reunited with his mother, dropping the woman’s money along the way. The final shot (which mirrors the opening shot of the movie) has Butch laying in the field next to the mask from Philip’s Casper costume and the money flying around him. 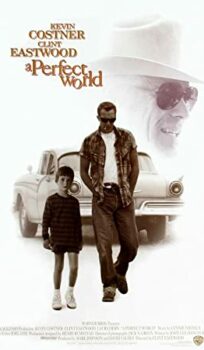