Shortly after the events of the last movie, the surviving Abbotts – Evelyn (Emily Blunt), Regan (Millicent Simmonds), Marcus (Noah Jupe), and the baby – make their way out of town when their house is destroyed. They are found by an old family friend, Emmett (Cillian Murphy), who hides them when the monsters attack. Regan and Marcus overhear the song “Beyond The Sea” playing on the radio, which means there are other survivors out there who can help. Despite her brother’s protests, Regan sets off on her own to find help. Emmett goes after her while Evelyn goes to find medical supplies when Marcus’s leg is injured by a bear trap.

Regan and Emmett encounter feral survivors that are killed off by a monster before they take a boat to the island of survivors, which is safe because the monsters can’t swim. However, one monster makes its way there on a boat and kills the survivors, forcing Regan and Emmett to hide. Meanwhile, Evelyn returns to Emmett’s compound to find that a monster is trying to get to Marcus and the baby. She manages to hold it off briefly, but it starts to make its way into the bunker.

Regan and Emmett find the radio station where the song way playing, and Regan uses her hearing aid on the microphone to play the frequency that weakens the monsters. Marcus hears it on the radio and uses it to weaken the monster that is attacking him and Evelyn, and he shoots the monster dead while Regan kills the other monster with a mic stand.

The noise plays on the radio for other survivors to utilize against the monsters. 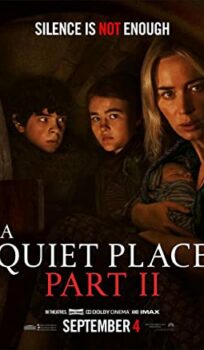