Short version:
Lee (John Krasinski) gets killed protecting his two older children from one of the creatures.  Evelyn (Emily Blunt) and the three kids survive.  Older, hearing-impaired daughter Regan (Millicent Simmonds) figures out the creatures are extremely sensitive to a high-pitch emitted by her hearing aid device and uses it as an advantage to defeat them.

Long version:
In 2020, after what seems to be an alien invasion of deadly creatures -this is never detailed-, the whole planet forces itself into a silent lockdown, since said creatures target and kill living beings by tracking sounds that are too high.  One family, the Abbotts, composed by father Lee, mother Evelyn and three children Regan, Marcus (Noah Jupe) and Beau (Cade Woodward), scavenge in a deserted town for supplies.  Beau wants a toy rocket, to which Lee refuses, since it might make noise that could attract creatures.  Regan, nonetheless, helps him sneak it off the store, batteries and all.  On the way home, Beau sets it up and turns it on; Lee tries to stop him but, sadly, a creature appears and snatches Beau away.

Over a year later, the family still grieves Beau’s loss, with a specially visible tension between Regan and Lee.  Also, Evelyn is about to give birth to another child.  Lee keeps trying to repair and upgrade Regan’s hearing aid piece, seemingly to no avail, which also deeply upsets the daughter.  Lee summons a reluctant Marcus to go fishing with him, leaving the wife and daughter behind.  While at the river -although not explained, the natural sound of the flowing river and the waterfall didn’t attract the creatures and created a natural protective sound barrier-, Lee and Marcus get to talk about the family situation.  Then, they find an old man grieving over the corpse of a dead woman.  Overcome with sadness, the man commits suicide by screaming to be mauled by the creatures.

Back at the farm, Evelyn goes into labor, accidentally steps on a nail, drops a shattering portrait and screams out of pain, attracting the creatures.  She manages to alert the rest of the family and hides in the soundproof basement with the newborn boy.  Lee manages to return to her, while the kids take refuge atop a grain silo; however, they both fall into it and almost drown in the grain at the same time that a creature appears.  They are saved by a fallen piece of the silo roof they clung to and Regan’s hearing aid emitting a high-pitch that hurt her but also seemed to hurt and scare off the creature as well.

While trying to return to the house altogether, the kids end up taking cover in a truck from the creature, while Lee realizes that, in order to save them, he’ll have to sacrifice himself drawing the creature towards him, which he does by screaming (but not before tearfully reassuring Reagan that he always loved her).

Regan and Marcus make it back to the farm to Evelyn and the newborn.  Regan finally gets to go to the basement -which she couldn’t before- and comes upon all the info Lee had had the whole time regarding her hearing pieces and the creatures.  When one of the creatures returns, the hearing piece acts up again against it and, at the same time, Regan realizes that, by putting it against the sound system, it becomes a painful weapon against the creature; it goes agonically crazy but, when it tries to attack once more, Evelyn shoots and kills it.

The movie ends with the two other creatures coming towards the farm, having heard the shotgun blast, but the family, with their newfound knowledge, finally getting ready to defeat them. 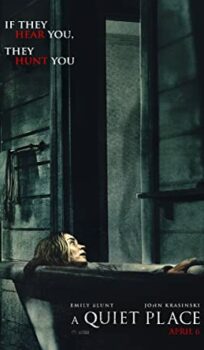