Short pooper:
The aftermath of the lawsuit filed by Ginny (Jessica Lange) and Rose’s (Michelle Pfeiffer) father and farming patriarch, Larry (Jason Robards), against them both, and with the other sister, Caroline (Jennifer Jason Leigh) by his side, along with the painful secret of Larry having sexually abused his two older daughters, causes an irreparable rift within the family. Although the two sisters get to keep the farm, Ginny, despondent with her own lack of courage, abandons it all and moves to the city. Later, she is informed that Rose is succumbing to cancer; she visits Rose and they make amends before Rose dies. Larry also dies, the farm is acquired by a corporation and Ginny takes her two nieces to start anew elsewhere.

Long version:
Larry decides to file a lawsuit against Ginny and Rose, with Caroline’s help, to recover the farm from them; Ken (John Carroll Lynch) is the one who serves Ginny the papers and also refuses to act as their lawyer, alluding he feels “she and Rose were both unfair to Larry” -the old man has managed to make it look like, after inheriting the farm, they have undermined him-. Ginny finds out Ty (Keith Carradine) was the one who spoke to Caroline about the storm incident and, when Ginny tries to talk to Caroline about it, she acts evasively. At the same time, Ginny declares her love for Jess (Colin Firth), but then runs off, ashamed.

Repercussions start almost immediately. Ty is ordered to “cease and desist” the construction of a barn in the farm ground, which, in turn, sours up their deal with the bank funding it. The sisters and their husbands find a lawyer willing to take the case, Charles Carter (Vyto Ruginis), but he warns them that, as part of the path leading to the eventual court hearing, they all basically have to “act the part” of their daily lives at the farm, if they hope to stand a chance. Ginny spots Larry and Caroline buying clothes at a local store where she is and hides from their view, only to notice them close as they never were before and in a way that deeply unsettles her; when she shares these concerns with Rose -mostly regarding a piece of clothing connected to all three of them-, Ginny finally admits that Rose was right: Larry committed incestuous sexual abuse against the two older daughters and might have vied for Caroline as well -left unclear if he actually did-. Pete (Kevin Anderson) drunkenly crashes his truck and drowns in a ditch, which, of course, tears Rose and her two daughters, Pammy (Michelle Williams) and Linda (Elisabeth Moss), apart. And, to top things off, Rose confesses to Ginny -much to her shock- that she also has had feelings for Jess and openly told Pete about it, which indirectly led to his death, all the while she states her loath for Larry, for his misdeeds and narrow-minded hypocrisy.

At the hearing, Caroline testifies against Rose and Ginny, putting them as mismanagers and only interested in having everything to themselves both. When Larry takes the stand, he gives an incoherent testimony that shows him believing that “Caroline is dead because the other two must have killed her”, which proves the point that he was suffering from dementia. The Judge (Bob Gunton) rules in favour of Rose and Ginny, citing lack of evidence from Caroline and Larry’s side to support their claim; however, at this point, too much damage has been done and the family is forever divided. Ginny leaves Ty and the farm and starts a new life in the city, as a waitress.

Six months later, Ginny and Ty reacquaint -it is implied they were divorced, or about to be-; he tells her he was planning to move to Texas to do pig farming; Rose took over the farm; Caroline had an ailing and senile Larry living with her; and that he also knew about their sordid secret, thanks to Rose, although no one believed it -obviously, because of the stand-up reputation Larry managed to build around himself-. Ginny admits she always played it too safe in life and that she never forgave him for the side he chose to take in their previous ordeal. One day, she receives a call about Rose being back at the hospital, her cancer relapsed and metastasized. Rose openly tells her that the girls already know she will die; Jess left her when her disease returned; she was bequeathing the farm to Ginny and a corporation would take over it -she didn’t want it for the girls-; how she regrets not having accomplished anything remarkable in life, despite their legacy; and how she did not want to pass away without forgiving herself and everyone around her. She also asks Ginny to tell Caroline the truth about what Larry did -which she, in turn, chooses not to-.

The film ends with Ginny moving away from the farm with her two nieces and narrating, in voiceover, that Rose died later, that same day; Larry died of a heart attack, months after; how her own inheritance came from everyone close to her who was already departed; how she was still figuring out “the way we judge those who hurt us when they, themselves, do not show remorse or understanding of what they do”; and that she could already see in the young girls the hope she never perceived in herself or her sisters. 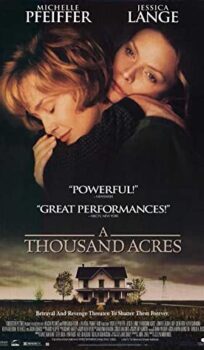