Ace (Jim Carrey) finds out that the Australian poachers Mick Katie (Andrew Steel) and Gahjii (Bruce Spence) were the ones who took the great white bat from the Wachati tribe, but they were stealing it for Vincent Cadby (Simon Callow).

Cadby wanted control of the bat-inhabited caves owned by the Wachati, since guano (bat feces), the main source of the Wachati way of life, was used in fertilizer, and fertilizer is a $1.4 billion industry. But, he could never legally take possession of the caves as long as the Wachatis were living in the area, so he had Mick Katie and Gahjii steal the bat to get the Wachati and the Wachootoo to wage war and destroy each other, leaving him free to assume ownership of the caves. Cadby only hired Ace to try and find the bat because he was afraid there was going to be a horrendous investigation after the war, and Ace was to be his alibi to prove he had done everything he could to stop it. Ace asks police chief Hitu (Adewale Akinnuoye-Agbaje) to arrest him, but Hitu is also in league with Cadby.

Hitu almost takes Ace to jail, but Ace calls to the consulate’s elephant for help, and with the elephant goes to the jungle and recruits an army of animals. They assault the consulate building and attack Cadby’s cronies, but Cadby escapes with the bat in a jeep. Ace pursues him through the jungle in a monster truck, eventually making Cadby crash his jeep and cause the cage with the bat in it to get stuck in a tree branch. Cadby tries to get the bat in his escape on foot, but fails.

Ace looks at the sun and sees that it is noon, the time when the Wachootoo tribe was going to attack the Wachati. He (VERY reluctantly) carries the bat by hand back to the Wachati village, and arrives there just mere seconds before the Wachati and the Wachootoo clashed in combat. Ouda (Maynard Eziashi) would see Cadby trying to sneak away nearby, so he gets both tribes to attack him. Ace puts the bat back in its cage, setting everything right again. Cadby manages to lose the tribes, but then a silverback gorilla comes up to him and proceeds to mate with him.

The Wachati princess (Sophie Okonedo) and the Tiny Warrior (Tommy Davidson) get married with Ace and his friend Fulton Greenwall (Ian McNeice) in attendance. When they attempt to consummate the marriage in a hut, the Tiny Warrior comes out and screams out in Wachootoo that she’s not a virgin. Ace was responsible for that, and the last scene shows him running from the angry tribes. 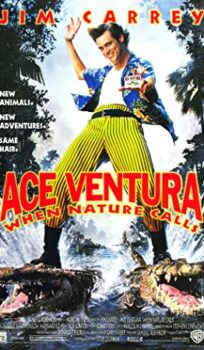