After Lucy (Evan Rachel Wood) leaves Jude (Jim Stugess) the two see each other at a peace rally which quickly escalates into a riot. The two attempt to reach out to each other but are pulled apart by police. Jude is bailed out of prison by his father and is told he is being deported for being in the US illegally.

While in a pub in Liverpool Jude has a vision of his friend Max (who survived his tour in Vietnam despite some head injuries) singing Hey Jude encouraging him to return to the US to find Lucy. He returns to the states to find all his former roomates having a concert on top of their former landlord Sadies record company. It’s quickly broken up by the police but Jude sticks behind and begins to sing All You Need is Love to the crowd below. Lucy hears this and tries to get up to the roof but is stopped by police. She climbs up to the next building and catches Jude’s eye as he sings to her. She smiles and it’s implied that they reconcile 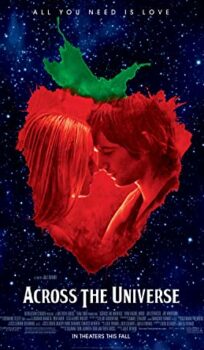