Paul (Justin Long) wants to propose to Anna (Christina Ricci). She misunderstands and leaves in a hurry. Anna gets in a car accident and wakes up in a funeral home. You are not sure if she is dead or the funeral director (Liam Neeson) is torturing her.

Paul is upset at the funeral and drinks too much. He leaves to go dig Anna up and see if she is really dead but he dies in another car accident on the way to the graveyard and wakes up at the funeral home.

NOTE: from Mimi
The director said she was most definitely alive. Which makes the entire story really tragic. In fact it was Liam Neeson’s character who ran her off the road in the first place. If you look back at the beginning you see his white van behind her while she’s driving in the rain. So he really did kill her from start to finish.

NOTE: from Ashley
“I watched the director’s short afterwards and she pretty much cleared it up that the character wasn’t dead as hinted by her breath being seen on a mirror twice.” 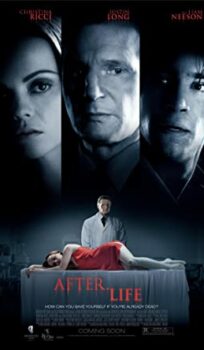