Werner Herzog directed this award winning film, which has been described as a major influence by Francis Ford Coppola.

In 1560, in Peru, Pizarro sends a group of soldiers down a wild river to search for El Dorado, the legendary city of gold.  They are led by Ursua, and Aguirre (Klaus Kinski) is second in command.  The journey is difficult, and they lose one raft with all the men on board.  Ursua announces a decision to return to Pizarro.  Aguirre fills the men with ideas of great wealth.  He reminds them that Cortez was told to turn back, but disobeyed orders and is now a wealthy governor.  The men mutiny.

As they travel down river, Aguirre becomes increasingly violent and insane.  Aguirre claims they are conquering their own empire, and declares Guzman is the emperor.  However, Guzman fails to obey Aguirre’s wishes and Guzman is found killed.  The men are starving and weak.  The natives in the surrounding jungle are hostile.  One by one, the men are picked off by arrows from the jungle.  Still Aguirre has delusions of creating a great empire, raising an army and going back to take Peru from Spain.

All the others die.  Monkeys from the jungle board the raft.  The movie ends with Aguirre, the only living man on a raft full of monkeys, raving madly. 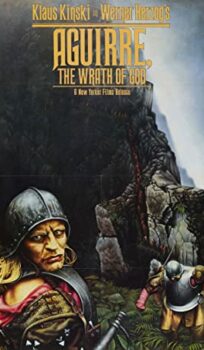