Pooper :
With help from the zany air-traffic controller team, Ted manages to safely land the plane and rekindle his romance with Elaine. The two embrace as “Otto” Pilot inflates a female companion and flies the plane off into the sunset.

Long Ending:
This hilarious film parodied a series of overly-dramatic films called “Airport” that were made in the ’70s.

An airplane, controlled by two pilots and a navigator (one of whom is played by Kareem Abdul-Jabbar) takes off. On board is a sick child, ebonic-speaking African-Americans and former army pilot Ted Striker (Robert Hays). Striker is on board to try to win back the heart of his girlfriend Elaine Dickinson (Julie Hagerty) who is a flight attendant working the flight. Ted has a traumatic story (though any seat-mate he tells it to commits suicide due to how boring the story is). Ted led a squadron of his men to their deaths during the war, being the sole survivor. Although Elaine had nursed him back to health, he was never able to regain his confidence, leading to their breakup.

It soon turns out that all passengers who ate fish as the in-flight meal have come down with an awful sickness that involves them puking up whole eggs. Dr. Rumack (Leslie Nielsen) tells the pilots that they must land ASAP, but it turns out the pilots and navigator both ate the fish and soon pass out. They activate the auto-pilot (named Otto), an inflatable man that continues to get into sexually compromising positions with Elaine throughout the film. Though Otto can keep the plane airborne, it can’t land the plane. Dr. Rumack and Elaine convince Ted that he must take the controls.

Ted is assisted by a crack team of experts at Chicago airport’s ground control, including drug-addled Steve McCroskey (Lloyd Bridges), flamboyantly gay Johnny (Stephen Stucker) and ultra-serious Rex Kramer (Unsolved Mystereys’ Robert Stack). The three manage to help Ted begin his descent, although Ted panics as they approach the landing strip. Dr. Rumack lets Ted know that he treated some of Ted’s men and that they were happy to have served for him. This returns Ted’s confidence and he successfully lands the plane, though causes much destruction in doing so (including destroying the last-remaining disco music radio station). Nobody is harmed (although one of the passengers is injured when the ambulance they are put in immediately crashes) and Elaine and Ted kiss in an overly-romantic embrace. The lovebirds look up to see that Otto Pilot has inflated a rubber female companion, and Otto pilots the plane back into the sky so he and his new girl can fly off into the sunset. 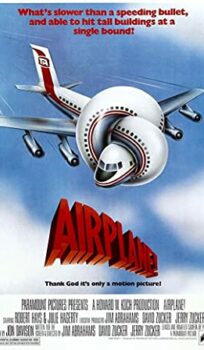