As Sean and Jessie follow Cubby towards a mountain where Jake might be, Perry and Koontz show up in their helicopter, tranquilize Cubby, and take off with him. However, Cubby soon starts to wake up because Koontz did not put enough tranquilizer in the dart to keep him sedated until he and Perry could get back to their camp, so Perry orders Koontz to land so he can dart Cubby again. Cubby fights back as this happens, and after the chopper touches down, he winds up biting Perry in his right knee and causes him to shoot his second dart into Koontz, who – in turn – shoots and disables the chopper’s controls with his rifle. Cubby then runs off to rejoin Sean and Jessie, and Perry and Koontz are last seen starting a 10-to-12-day hike to the nearest road (where they will likely be arrested for their poaching activities upon returning to civilization, given that their camp was found by the cops during their absence).

Sean and Jessie continue on and later find Jake, still in his wrecked plane lying halfway down the face of a cliff on a small ledge. Sean rappels down and secures a line around Jake and gets him out of the plane just before it slides off the ledge and smashes to bits on the rocks below. Just as Sean reaches the top, the knot on the anchoring rope slips due to the combined weight of him and his father, sending them falling back down and threatening to take Jessie down the cliff along with them. Thankfully, Cubby appears and anchors the climbing rope with his teeth, and he and Jessie pull Sean and Jake up, and the three humans embrace. They then see Charlie flying nearby in his chopper and send up a flare to get his attention, and he sees them.

As the humans and Cubby head back to Quincy, Jake spots an adult polar bear on the ground with a juvenile cub, so he has Charlie land nearby. Sean and Jessie say goodbye to Cubby and send him off to join the bears, then they, Jake, and Charlie resume their journey home.

Sean (Vincent Kartheiser) and Jessie (Thora Birch) meet up with Ben (Gordon Tootoosis), his grandson Chip (Ryan Kent), and Chip’s father (Byron Chief Moon) during their journey after the trio – who were on a caribou hunting trip – save them (especially Sean) from drowning in a raging river. After feeding them and getting them warm, Chip tells his father that Sean and Jessie said that their “tornak” (or “spirit guide”, that being Cubby, the polar bear cub that has been following them around for the last two days) led them here, and his father tells the duo that he will be taking them back to Quincy tomorrow morning. They refuse this, as does Ben, with Ben telling his son that Sean and Jessie are on a spiritual journey to find Jake (Dirk Benedict), and it would be wrong to stop them now given how far they have already come. Unfortunately, his son is unmoved, and he restates his intentions to Sean and Jessie.

However, Chip wakes Sean and Jessie early the next morning and says that he and Ben are going to get them out of here before his father gets up, and he gives them some food and supplies to replace the ones they lost when they fell in the river. Jessie remarks to Chip that this is very manly of him (he went on this hunting trip as a family rite of passage into manhood), and she kisses him on the cheek. Ben then spots Cubby nearby, and Sean and Jessie inform him of how Cubby has been following them and that its mother was killed by poachers. Ben tells them that Cubby is looking out for them, and he soon gives Sean a necklace with a polar bear carving attached to it before telling him that touching a polar bear is a gift and he and Jessie had better not throw it away. He lastly tells Sean and Jessie to trust the bear before they continue on their way. Meanwhile, Charlie (Ben Cardinal) spots Perry’s (Charlton Heston) and Koontz’s (Duncan Fraser) camp in his helicopter while out looking for Sean and Jessie (having been falsely told by the poachers – masquerading as Sierra Club photographers – the other day that they found their kayak smashed on the rocks in a location far off from where the kids actually are) and lands to investigate it. After finding evidence of their poaching activities, he radios it back to Sgt. Grazer (Don S. Davis) and tells him to send somebody up to the camp (and presumably gives him descriptions of the poachers) before adding that he is heading up to Devil’s Thumb Pass, feeling that Perry lied about the possible deaths of Sean and Jessie as well.

As Sean and Jessie get closer to Devil’s Thumb, Cubby goes in a direction away from that place, which the kids take as a cue to follow him. However, while ascending a different mountain, they are surprised by Perry and Koontz in their helicopter, and after the kids hit the dirt to avoid it when Koontz flies in low, Perry shoots Cubby with a tranquilizer dart. He then has Koontz make a landing, after which he loads Cubby inside and they fly away. However, the departure doesn’t last long, for Cubby starts to wake up quickly thanks to Koontz not having filled the dart with enough tranquilizer to keep Cubby sedated until they could get back to camp. Perry orders Koontz to land so he can dart the cub again, but the cub fights back in the process. As Perry continues to struggle with Cubby just after they exit the chopper, Koontz steps out wielding a hunting rifle, but then Cubby bites Perry in his right knee, making him fire his second tranquilizer dart into Koontz and subsequently causing Koontz to accidentally shoot the helicopter’s control panel, completely disabling it. Cubby runs off to rejoin the kids, and when we last see Perry and Koontz, they have started a 10-to-12-day hike to the nearest road (though it is never shown, it can be safely assumed that, when they do return to civilization, they will be arrested).

Sean and Jessie keep going in the direction Cubby was leading them in, and eventually, they find a trail of parts ripped off from Jake’s plane. They call out to him, and he hears their calls and shoots up a signal flare to show them where he is. After finding that his shredded plane lies halfway down the face of a cliff on a small ledge, Sean decides to rappel down to him. He reaches Jake and gives him some climbing rope to tie around his waist, and Sean is able to secure him before the plane slides off the ledge and smashes to bits on the rocks below. As Sean just manages to climb back to the top, the combined weight of him and his father causes the anchoring rope’s knot to slip, and Jessie soon finds herself in serious danger of being pulled down over the cliff to her death along with her family. Thankfully, Cubby appears and grabs the rope with his teeth to help anchor her. Sean finally gets topside, and he, Jessie, and Cubby pull Jake up with all of their might, after which Jake embraces his children. Moments later, they see Charlie’s helicopter flying nearby, so they send up another flare to get his attention, and after he spots them, he calls into the police station and says that Sean and Jessie have found Jake.

While the humans and Cubby are on their way back to Quincy, Jake spots an adult polar bear with a juvenile cub close by and tells Charlie to land the chopper. They let Cubby out, and Sean and Jessie say their goodbyes to him. Cubby then runs off and finds and joins the other polar bears, and the humans resume their journey home. 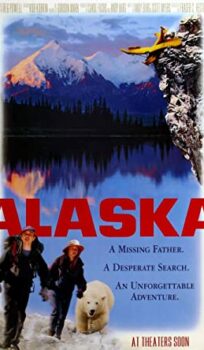