Alexander and the Terrible, Horrible, No Good, Very Bad Day(2014)

On the eve of his 12th birthday, Alexander (Ed Oxenbould) has a truly terrible day filled with accidents and humiliations… so just after midnight he makes a birthday wish that his parents and siblings would have a day like his, instead of their own seemingly charmed lives, so they could understand how hard it is to have so many awful things happen to a person.

On his birthday, everything goes perfectly for Alexander, while everyone else in his family has a day with everything going wrong:

The entire family winds up at the same restaurant for Anthony’s prom date and Dad’s followup interview, which ends after Dad’s borrowed shirt catches on fire. The family goes outside the restaurant to regroup and Alexander declares that his birthday wish is the reason for everything bad that has happened and asks them all to forgive him for cursing their day. The family realizes that bad days happen sometimes and that they will get through it because they love and have each other; Anthony ditches his snobby prom date and they go home to Alexander’s amazing birthday party (including an Australian-themed petting zoo).

Dad gets the job, Mom doesn’t get fired because the Dick Van Dyke reading goes viral and generates interest in the book, and Alexander’s crush comes to his party, which is a huge success. 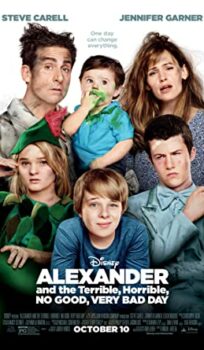