Pooper:
The two survivors, Tennessee (Danny McBride) and Daniels (Katherine Waterston) and their robot Walter (Michael Fassbender) escape and head to their original planned colony. Just before being put into hyper-sleep, Daniels realizes that Walter is actually David, who coughs up a couple of face-hugging embryos, ready to breed in the new colony.

Longer:
Covenant is a colony ship in transit to a distant planet with a cargo of crew, colonists and a bunch of frozen embryos plus their robot, Walter (Michael Fassbender). The ship must drop out of FTL drive periodically to deploy solar sails and recharge the engines. But this time a nearby solar flare damages the ship, prompting Walter to wake the crew – but the captain is killed due to the damage sustained.

While they repair the ship, they discover a nearby habitable planet. The new captain, Oram (Billy Crudup), decides to investigate as it looks better than the one they were on the way to. His second officer, Daniels (Katherine Waterston), objects strongly to this but is overruled. The planet is surrounded by an electrical storm which makes it difficult to land or communicate with the surface.

A landing craft goes down, and the people explore. As they go they split into two groups, the main one with Oram and Daniels heading onwards and a pair stopping to collect samples. The main group eventually find an Alien spacecraft crash-landed (the type seen in the original movie). Both groups have somebody step on a little puff ball that spurts floating black pollen-type stuff that goes into their bodies. Within an hour or so both guys feel sick. The couple on their own head back to the lander, the main group an hour or so behind them.

On getting back to the lander, the infected guy has a “back burster” emerge through his back. It’s somewhat Xenomorph like, but with human-looking skin and a different mouth. The lander crew tries to kill it, but in the battle the lander is damaged and explodes, killing most everyone.

Back in the fields, the second infected guy also has an alien pop out, this one through his mouth. This creature and several more that were already on the planet attack and the crew fight them. Walter loses a hand in the battle when an alien bites it off. Then a new figure appears, launching a flare that drives the aliens off.

He leads them to a nearby decaying city, much of which is full of blackened corpses. The figure proves to be David (also Michael Fassbender), the robot from Prometheus. David explains that he and Liz Shaw went back to this planet – the Engineer’s world. But when their ship arrived, he says, it automatically ejected hundreds of canisters of the black goo, killing all the Engineers. The ship subsequently crashed and, he says, Shaw was killed.

One of the Aliens gets into the city and kills a woman, and is killed in return. David and Walter have some bonding time – but then it’s revealed that David has spent years experimenting on the black goo, creating all sorts of creatures out of it. Walter also realizes the bombing of the Engineers was no accident – David did it on purpose. He also experimented on Shaw as part of his gruesome work, eventually killing her. He states that Humanity is a failed race, and he intends to create new life from the black goo.

Meanwhile, the ship in orbit has come down far enough to get a radio transmission through the storms and sends down a cargo lifting craft to pick up the crew.

David leads Captain Oram into a cavern holding his ultimate creation – the Xenomorph eggs. Yes, that’s right – the original Xenomorphs were created by David using the black goo. Oram is infected, and a Xenomorph hatches out and kills most of the remaining people. Another face hugger jumps onto Lope, another crewmember, but they yank it off in a few seconds.

David and Walter fight, and it appears that Walter wins. In reality, it’s pretty obvious that it’s David pretending to be Walter.

The cargo lifter picks them up, and they fight the Xenomorph which hops on board and kills it before going back to the Covenant.

But once aboard, it turns out that Lope has an egg in him from his brief face hugger encounter, which births another Xenomorph. There’s some running through corridors and fighting, and Daniels manages to kill it by luring it to the vehicle deck and rolling huge trucks out into space until one smashes into it.

Everyone goes back into cryosleep. Just as she is falling asleep, Daniels realizes that Walter is actually David, and asks him what he’s going to do. He replies that he will do to her just what he did to Shaw, and she screams in horror as she freezes. David goes the bay holding the frozen embryos and coughs up two embryo face huggers which he puts in with the rest. 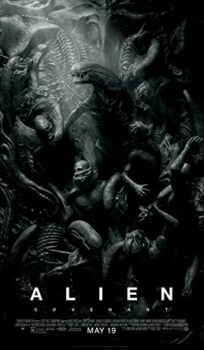