Edwina Cutwater (Lily Tomlin) was a very rich but sickly woman who never got to enjoy her wealth or experience much of life. She changed her last will to leave all her money to young, healthy, beautiful Terry Hoskins (Victoria Tennant). Then she arranged with the Swami Prahka Lasa (Richard Libertini) to place her soul inside the Terry’s body after Edwina died. But due to a foul-up, Edwina’s soul was placed inside the body of lawyer Roger Cobb (Steve Martin).

Roger tries to get the swami to transfer Edwina out of his body and into Terry’s. The swami transfers Edwina’s soul into some water, and Roger tried to get Terry to consume the water.  But Terry never thought the swami’s magic would really work! She’s a con artist who went along with the plan only so she’d inherit Edwina’s money. When she realizes the magic is real, she pours out the water.

Roger is heartbroken. Though he had originally hated Edwina, he had learned to like her, even to love her while her soul inhabited his body. But it turns out Edwina is NOT gone! Roger’s friend, the black jazz musician Tyrone (Jason Bernard) had drunk some of the water earlier, mistakenly thinking it was gin! Edwina’s soul is now in Tyrone’s body!

Roger and the swami confront Terry, and found out she is an ex-convict who faces life in prison if she is ever arrested again. Terry agrees to let Edwina have her body, so long as Terry’s soul can be placed somewhere she can remain free. The swami places Terry’s soul inside a horse, and puts Edwina’s soul in Terry’s body.

So, at last, Edwina is inside a healthy young body, and she can finally enjoy life, the way she’d always wanted to. As the movie closes, Roger dances with “Terry,” who is really Edwina. (As Steve Martin dances with Victoria Tennant, we see him dancing with Lily Tomlin in the mirror.) 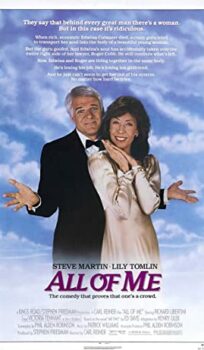