All Quiet on the Western Front
Academy Award – BEST PICTURE – 1930

Based on the book by Erich Maria Remarque, has four main points in the plot towards the ending

1. Paul Bäumer (Lew Ayres) shoots a French soldier in the head, and then stays with him in the foxhole until the soldier dies. Bäumer then takes the corpse’s wallet, and promises to make amends by sending it to the corpse’s wife.

2. Bäumer’s best friend goes into a MASH (mobile armed services hospital), where his legs are amputated. The amputee screams a lot while Bäumer stays there helpless.

3. Bäumer goes back to his old school in Germany where he was recruited and his teacher is happy to see him until Bäumer tells the children how horrible war is.

4. At the very end, Bäumer sees a butterfly near his bunker. He goes out to touch this thing of beauty, which is the first sign of innocence he’s seen in a long time. When he climbs out of the bunker, the enemy shoots him, and the credits roll. 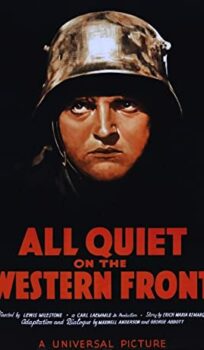