Richie Roberts (Russel Crowe) gets one of Frank Lucas’s (Denzel Washington) cousins to wear a wire after he witnesses him almost kill his girlfriend. Roberts is able to figure out when Lucas’s next shipment is coming into the US. They find that Lucas is smuggling the heroin into the country by hiding it in the false bottoms of dead soldiers’s coffins.

Frank Lucas is arrested but makes a deal with Roberts in order to shave time off of his sentence. He gives Roberts enough information to put away two-thirds of the crooked cops that were in the special drug task force. At the very end of the movie it is 1991, and Lucas is released from prison. His wife goes back to Puerto Rico. 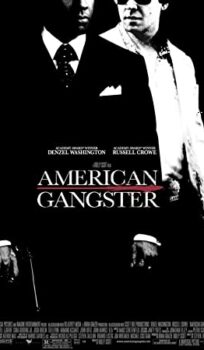