Pooper:
Mary is stabbed, one night in her home, by the enraged husband of her first female client (who had asked her to perform a surgery to remove her nipples and close her vagina to look like a doll). She dies trying to sew her stab wound up, and the police find her body and evidence of all of her work.

Longer version:
Mary Mason (Katharine Isabelle) is a medical student, learning to become a surgeon. Low on cash, she applies at a strip club, but the owner Billy notices the surgery skills on her resume and gives her a ton of money under the table to perform surgery on a man. Reluctant at first, she accepts because the money is too good. She does such a good job, word spreads and a woman (who has had many surgeries to look like Betty Boop) named Beatress shows up at her apartment and promises even more money for Mary to perform an irregular surgery for her friend Ruby. The surgery is for Mary to remove Ruby’s nipples and close up her vagina as much as possible to look exactly like a non-sexual doll. Once again, Mary reluctantly accepts due to the money.

A professor at school takes notice of Mary’s financial upturn, and it is implied he believes she has become a call girl, to be getting so much cash so suddenly. Taking that as a sign that Mary is “easy”, he invites her to a party where he drugs and rapes her while recording it. This event changes Mary who drops out of medical school and pays Billy to kidnap the professor so she can take revenge on him by practicing extreme body modification surgeries on him. She keeps him alive in a storage unit but eventually kills him when a security guard finds him (who she also kills).

From there, Mary sets up shop in a new apartment, and performs unusual and extreme body modification surgeries for anyone who inquires as well as connections through Billy, and seems to become addicted to it. Billy also starts to have an extreme attraction towards her and would essentially do anything for her. A police detective named Dolor begins keeping tabs on Mary due to the professor’s disappearance. On top of this, it turns out Ruby has a husband, who towards the end of the film finally sees what Mary did to his wife (even though she asked for it and was very satisfied), and becomes enraged.

After a strange night of tensions between Billy and Mary’s relationship, Billy offers to take Mary away for a vacation. She declines, as she has become disenchanted with everything and is a bit hollow after everything that has happened. When she returns home that night, Ruby’s husband is waiting for her and stabs her. Instead of calling for help, Mary drags herself into her studio and tries to sew her own wound.

The film cuts to the police searching her home, finding a portfolio of all her patients (including the professor, proving her guilt), and detective Dolor finds her dead on the floor. 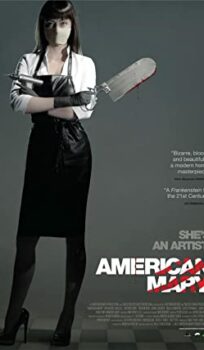