SHORT VERSION:
With the assistance of Noah Levenstein, the creator of the Bible (the titular Book of Love), as well as the other people who have checked out the book and wrote their entries into it over the years, Rob, Nathan, and Lube successfully recreate it and finally read it in full.

Fully armed with its knowledge, the trio then go on their school’s ski trip, and Rob wins over and sleeps with his love interest Heidi while Lube does the same with his longtime crush Ashley. Nathan tells his girlfriend Dana that he supports her pledge of abstinence before marriage, but she replies that she has dropped it because she feels it might interfere with their relationship being as good as it could possibly be. They then have a sex-filled weekend using his knowledge from the Bible and her recently-purchased copy of the Kama Sutra.

The guys return the Bible to its hiding place in the school library, and Rob also secretly shoots a video of his brother Cody pleasuring himself with a vacuum cleaner and posts it on an internet video site, as revenge for all of the embarrassing videos Cody shot of him and posted on the same site.

LONG VERSION:
At a party Scott Stifler (John Patrick Jordan) is holding, Rob (Bug Hall), Nathan (Kevin M. Horton), and Lube (Brandon Hardesty) decide to try to get laid by being “real” with their love interests (showing the ladies respect and saying what is on their mind), but they all fail: Rob doesn’t notice his love interest Heidi (Beth Behrs) overhearing him enthusiastically declare that he is going to get laid tonight, and he later finds her making out in a bed with Scott. He leaves, and when she catches up with him and tries to explain what he just saw, he angrily tells her to go away. Lube approaches his crush Ashley (Jennifer Holland) and kindly states that he would like to truly satisfy her in every way possible, but she politely replies that she is not interested in having sex with him. Nathan tells his girlfriend Dana (Melanie Papalia) that he cares about her feelings and her pledge of abstinence before marriage and he wants to make her feel good tonight, but he attempts to have sex with her again and only upsets her further. A very drunk Rob later tells Nathan and Lube that this attempt has failed and only bad boys get the action, so he acts like a bad boy around another woman and gets her in bed with him. However, before they can start having sex, his conscience takes on the form of Heidi and tries to dissuade him, and then he pukes on the woman and passes out.

The next day, the guys meet up to vent over their failures, and Rob realizes that they need to restore the Bible (the titular Book of Love) to its former glory, because they need to read the whole book to understand how to get laid instead of just checking out the only readable parts of it. They therefore contact Noah Levenstein (Eugene Levy), the Bible’s creator, and meet with him and explain that the Bible has been ruined and they want to reconstruct it by contacting everyone who checked it out and submitted their entries into it over the last forty years. Sure enough, with Noah’s help, the boys succeed in this task, and a brand new Bible is created. The boys read it in full just before they go with their classmates on a school ski trip.

At the ski lodge, Katie (Adrienne Carter) – a gal Scott has been continuously blowing off – confronts Scott as he is playing strip poker and gets involved in the game. She has Scott agree to a bet where, if he wins the next hand, she will strip to her birthday suit, but if she wins, then he must apologize to her for blowing her off and run through the snow naked. He loses, and she locks him out of the cabin as soon as he steps outside. She gets her apology from him and also forces him to admit that he cries after he climaxes, and then a moose suddenly appears that chases after him and humps him. Dana meets up with Nathan, and he tells her that he completely supports her abstinence pledge now, but she replies that she has dropped it because it could get in the way of their relationship being the best that it could be. She then shows that she has bought a copy of the Kama Sutra, and they use its information and Nathan’s knowledge from the Bible to have a sex-filled weekend.

The next day, all of the students hit the ski slopes, and Rob and Heidi share a gondola going up. Heidi tells Rob that she didn’t sleep with Scott, and Rob says that he didn’t talk to her until now because he needed to sort out his feelings, and he knows that she is her own woman and must make her own decisions, but he thought they had something. She tells him that they do, and she wanted their first time having sex to be special, so she sought to gain some experience by sleeping with Scott. She points out his hookup from that night, but he lets her know that nothing happened, and he couldn’t picture his first time being with anyone else but her. They start kissing just after Nathan and Dana enter the ski lift control room to have sex in it and accidentally shut off the lift.

Lube and Ashley also share a gondola going up and get to talking, and Ashley tells him that she assumes him to be just another guy who wants to sleep with her because he views her as a status symbol and nothing more. When the lifts shut down, Lube decides to leave to get help, but he accidentally falls out of the gondola straight down into the snow. Ashley climbs down to check on him, and he tells her in depth that he has always liked her ever since they were kids and he truly wants to get to know her and satisfy her in every way. Moved to tears, she kisses him.

The lifts then start back up, so the two new couples return to the lodge and have sex. In the midst of all of this, Imogen (Louisa Lytton) walks near Scott as he is nursing his injuries, and he tells her that he knows about her older boyfriend dumping her recently. She comments that guys apparently never outgrow being jerks, but he insightfully replies that no older guy is going to take a high school girl seriously. They are last seen comforting each other.

Rob, Nathan, and Lube put the Bible back in its hiding place in the school library, where it will wait for the next guy(s) in need of its knowledge. Rob also secretly shoots a video of his brother Cody (Nico McEown) pleasuring himself with a vacuum cleaner and posts it on an internet video site, as revenge for all of the embarrassing videos Cody shot of him and posted on the same site. 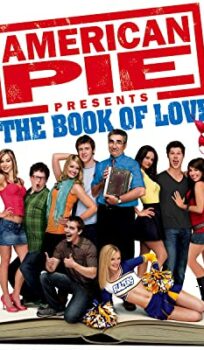