After Stifler’s (Seann William Scott’s) attempt to a high-school-like party falls apart following Finch’s (Eddie Kaye Thomas’s) arrest, at the same time, Mia (Katrina Bowden) dumps Oz (Chris Klein) after her catfight with Heather (Mena Suvari); a distraught Michelle (Alyson Hannigan) decides to stay with her grandma; and Stifler goes back to work.  Jim (Jason Biggs), not wanting to lose his wife, goes once more to his dad Noah (Eugene Levy) for advice, and he just tells Jim that “they need to find time to be husband and wife as much as mommy and daddy, and the rest will come on its own”.

The next day, at the reunion, Finch comes clean: he wasn’t travelling the world; he was actually a manager at Staples in Bayonne, New Jersey, and he stole the bike from his boss when he got lied to about getting a raise.  The guys get together and go bring Stifler to the reunion; while there, Stifler’s jerk boss (Vik Sahay) comes in to give him crap for the nth time, but Stifler stands up to him and quits to join his friends at the reunion.

Lots of resolutions take place towards the end: Oz and Heather rekindle their pending romance; Kevin and Vicky (Tara Reid) agree to stay good friends while he reconnects with his wife Ellie (Charlene Amoia); Finch admits to Selena (Dania Ramirez) his love for her; Jessica (Natasha Lyonne) shows up, bringing her very butch-looking girlfriend (Jen Kober) along; the two gay guys from the old lacrosse team want Stifler to be their wedding planner, to which he happily agrees; and, of course, Jim and Michelle reconcile and have very passionate sex in the Band Room, at the same time that Nadia (Shannon Elizabeth) spots them and comes to say hi with her own date.  Oh, and as if it weren’t enough, Stifler runs into FINCH’S MOM (Rebecca DeMornay) and,… well, you can guess what happens next… in the middle of the football field!!, and cheered by the two MILF guys (John Cho, Justin Isfeld).

The morning after, Jim runs into Kara (Ali Cobrin) and the two apologize to each other and make up.  Then, while together at Dog Days, we come to know that Oz will stay in East Great Falls to be with Heather; Finch and Selena are planning to go to Europe together; Kevin and Jim will go back to their respective -albeit, revived- married lives; and Stifler drops Finch strong hints about his mom (payback from the first three American pie films!!).  The gang agrees to stay in touch between each other and hook up at least once a year to catch up.

The movie ends, the credits roll briefly, and we see Jim’s dad and Stifler’s mom (Jennifer Coolidge) on a date at the movies. Suddenly, she slides in front of his seat to perform oral sex on him, much to his delight. 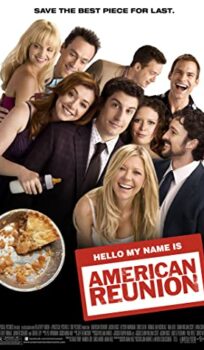