SHORT VERSION:
During her search for Curtzman at Oktoberfest with help from Natalie, Chuck, and Kevin, Priscilla randomly discovers her boyfriend Brad cheating on her, and the other woman is her Purity Academy mentor Mary Margaret. She responds to these betrayals by getting drunk, and after later telling Chuck about her discovery, she tries to have sex with him, but he refuses because he doesn’t want to be a part of something he knows she’ll regret later. She then goes out to have sex with the first guy she sees, but Chuck informs Natalie about her plan, and she is able to find Priscilla and talk her out of it. She tells her to take her time and think about what she wants in regards to sex, and whatever she decides, she must do it for herself and no one else.

Priscilla and her friends later go to a Chicks Go Crazy party that Curtzman is hosting, but are joined by Curtzman’s daughter Becca, whom Chuck had earlier managed to contact. Priscilla confronts Curtzman and asks him to give her the topless footage of herself so she can keep her scholarship, but he refuses, even after Becca appears before him and backs her up. Angered that Priscilla turned his daughter against him, Curtzman tells her that the footage is going onto his next video, and he then insults the women who show off their assets for his videos and the guys who buy them, unaware that his microphone is on and the partygoers have heard him. When he goes out to greet them, they gang up on him and strip him naked. A week later, Curtzman’s cameraman Rudy mails Priscilla the footage, and she discovers that a different girl had went topless; she was off to one side dealing with alcohol-induced sickness but still clothed.

Priscilla winds up losing her scholarship anyway when she resigns from the Purity Academy, and she and Chuck become a couple and lose their virginity together.

LONG VERSION:
On their second day in Detroit, Chuck (Chase Ryan Jeffery) manages to locate the Chicks Go Crazy tour bus, and after reporting this to Priscilla (Jenna Dewan), Natalie (Brianne Davis), and Kevin (Elan Moss-Bachrach), they break into it while Curtzman (Rob Schneider) is off shooting content for his next video and search for the topless footage of Priscilla. As they look around, Priscilla finds a picture showing Curtzman with his daughter Becca (Sarah Habel), which Chuck puts in his pocket. Shortly afterwards, Curtzman and his cameraman Rudy (Bo Burnham) make their return, forcing the quartet to flee.

The group winds up getting separated, and Priscilla randomly spots her boyfriend Brad (Ben Marten) from afar in the Oktoberfest crowd. She follows him after he disappears down an alleyway, and to her utter shock, she catches him having sex with another girl, which is made even more shocking when she discovers that the girl is Mary Margaret (Bridgette Pechman), her mentor at the Can’t Hurry Love Purity Academy. Shattered by these betrayals, Priscilla walks away and gets drunk. She gives her purity ring to a server as payment for one of the drinks, saying she doesn’t need it anymore.

Back at the hotel room that Priscilla and company are staying at, Chuck is shown trying to call Priscilla to inform her that he and the others lost track of Curtzman, but she isn’t answering her phone. He then takes a look at the photo of Curtzman and Becca, and after seeing her college sweater, he gets on his laptop and searches for Becca in the database of the college she is attending. Moments later, the drunken Priscilla appears, and she tells him about what Brad and Mary Margaret had gotten up to and how she now considers herself to be a joke since her beliefs are based on lies. She then attempts to have sex with Chuck, but Chuck halts her, pointing out that she is drunk and upset and would likely regret it later, and he didn’t want to be a part of anything like that. Priscilla then decides to go out and find someone willing to do the deed with her, despite Chuck’s attempts to dissuade her, and after she leaves, Natalie shows up. Chuck fills her in on what Priscilla is planning to do and what spurred her to carry out this plan, so she goes out to find and put a stop to her while telling Chuck to remain in the room in case if she comes back.

Priscilla heads to a bar and propositions several guys, but all of her attempts end in failure. Just as she leaves, Natalie finds her, and she tries to discourage Priscilla from going through with having sex in this manner, saying that she isn’t thinking straight. Priscilla then takes the opportunity to insult her for seemingly having no plan for her life, and Natalie replies that she wants to be a photographer, which Priscilla also dumps on. However, she calms down and apologizes to Natalie after seeing that she has hurt her feelings, and then says that this promiscuous approach just isn’t her style. Natalie tells her to take her time and think about what she really wants, and whether she decides to remain a virgin all of her life or become a nymphomaniac, she must make this decision for herself and no one else.

They then go back to the hotel, where Chuck and Kevin are waiting for them, and Kevin says that he is ready to give up since Oktoberfest ends tonight and Curtzman, whom they still haven’t found, is flying to Miami first thing in the morning. Thankfully, Chuck remembers a flyer he earlier obtained advertising a Chicks Go Crazy party being hosted by Curtzman that night and shows it to everyone, so they immediately head over to the venue it is taking place in, hoping to confront Curtzman and get him to hand over the footage. Before they can go inside, Kevin gets another call from his nagging and clingy girlfriend Eileen (Ashley Schneider), and after enduring another verbal reaming from her, he tells her that he has had enough of her and that they are through. Becca then suddenly shows up, having responded to a message Chuck sent to her about Priscilla’s troubles, and she gives Priscilla a VIP pass so she can meet her father directly.

Priscilla approaches Curtzman backstage and makes an impassioned speech asking him to give her the footage so she can keep her scholarship and enable her to get her education, but Curtzman refuses to oblige her. Becca then appears and re-states Priscilla’s request, but he ignores her, too. Priscilla asks Curtzman what he would do if Becca had been the one that got videotaped, but Curtzman replies that he raised Becca better than that, prompting Becca to flash him and then leave feeling disappointed in him. Angered that Priscilla turned his daughter against him, Curtzman growls that he is going to put her footage on his next Chicks Go Crazy video and release it worldwide tomorrow. Moments later, Curtzman is given his introduction to come out, but he isn’t aware that his microphone has been turned on in conjunction, so the audience hears him as he proceeds to make disparaging remarks to Priscilla about both the women who show off their assets for his videos and the guys who buy them. After having her escorted out by a security guard, he goes out to meet the audience, but he is greeted with a sea of hostile stares and dead silence. After figuring out that they had heard his insults, he tries to escape the building, but he is quickly ganged up on, stripped naked, and teased by the crowd, with Rudy capturing every detail on his video camera.

Back at the university a week later, Priscilla is seen chatting with Natalie, and she tells her that she has resigned from Can’t Hurry Love but lost her scholarship as a consequence, and thus has applied for student loans and taken a student union job to cover her tuition and expenses. They then spot Chuck playing ping-pong with Kevin nearby, so Priscilla goes over to talk to Chuck. She first finds out that Kevin and Eileen have decided to be friends, but are now taking some unhelpful counseling for that like they did for their relationship, and she then asks him if he regrets refusing her that night in the hotel room. He admits that, while a part of him does, he likely would’ve made the same choice if the situation was presented to him again. Then, in a roundabout way, he admits to being a virgin himself, which pleases her, and they then have their first kiss. When Priscilla returns to her dorm room, Natalie gives her a package that just came in the mail, and Priscilla finds it contains a blank DVD and a note from Rudy, where he says that the DVD’s contents belong to her. When she and Natalie play it, they discover that some other girl wound up wearing the moose head and went topless for the camera; Priscilla was off to one side dealing with sickness from drinking too much alcohol, but still clothed.

Three months later, Priscilla has gone steady with Chuck, and she gets some advice on sex from Natalie, Kevin, and Eileen before she leaves to meet with him and lose their virginity together. Natalie is seen with Kevin as she is trying on her graduation cap and gown, since she is finally graduating tomorrow after seven years there, and they overhear the sex noises Priscilla and Chuck are making and laugh with delight. Natalie soon breaks the fourth wall and says with a smile “I wonder what Mary Margaret would say now?” A final Chicks Go Crazy video title (a few of which appeared throughout the film detailing Priscilla’s supposed decent into debauchery) says that Priscilla is now 0% pure, but 100% satisfied….eventually.

Just before the credits roll, we see a commercial for a Guys Go Crazy line of videos, all featuring Rudy’s footage of Curtzman. 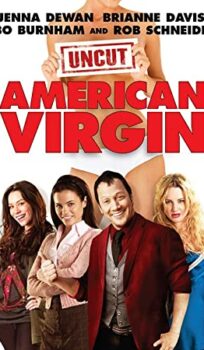