POOPER:
Kate Batts never cursed the family.  John raped Betsy, and the spirit of her stripped-away innocence is what’s haunting him.  After Lucy learns the truth, she poisoned John, ending the haunting.  Betsy marries Richard.  In 2006, the spirit returns and Elizabeth sees it.  She now knows that her ex is raping their daughter.

LONG VERSION:
The movie opens with title cards that read “There is only one recorded case in the history of the country where a spirit caused the death of a human being.  This event became the most documented haunting in American history.”

In Red River, Tennessee in 2006, a teenager named Jane wakes from a nightmare where she was chased by the ghost of a girl.  Her mother calms her down, and tells her to get ready to be picked up by her father.  Later, Elizabeth, the mother, opens up a letter contained in paperwork about her ancestors that lived on the property 200 years earlier.  The letter is from Lucy Bell, and as Elizabeth reads it, the story shifts to the year 1817.

Betsy Bell (Rachel Hurd-Wood), who was the ghost girl seen in 2006, is the teenage daughter of Lucy Bell (Sissy Spacek), and Lucy is the wife of John Bell (Donald Sutherland).  John is in church court for usury, because he charged 20% interest for a loan to his neighbor Kate Batts, and is found guilty.  The court deems the loss of his good name as enough punishment, but Kate, a suspected witch, has threatened both him and Betsy with a curse.  Soon after, the Bell family, which also includes Betsy’s brother John Jr., begin to see and hear things that are not there.  After a frightening incident where a spirit touched Betsy while lying in bed, John is convinced that Kate really has cursed him, but Lucy doesn’t believe it.

After the touching incident, Betsy’s health and attitude begin to worsen, which is noticed by her young schoolteacher (James D’Arcy), who also has a crush on her.  That night, the spirit returns, and it assaults Betsy in front of the entire family.  Now certain that the family is cursed, John tells a church friend of his named James what is happening, and James tries to use the Bible to rid the house of the suspected demon, but it doesn’t work.  Richard the schoolteacher is also told what is happening, and he thinks there are scientific reasons for the events, and agrees to live in the Bell’s house to prove his theory.  After witnessing another assault of Betsy, he now believes the house is haunted.  Meanwhile in 2006, Elizabeth is continuing to read Lucy’s letter about the spirit, but she is finding it hard to believe.

Now in 1818, the haunting of the Bell family increase in intensity, and everyone’s health is getting worse.  One day, a man who works for Kate Batts brings a sack of blood-stained clothes to the Bells, and they determine that they belong to John and Betsy.  Chloe, one of the Bell’s house servants, tells Lucy that if a witch has your blood-stained clothes, that means the curse cannot end until the cursed person is dead.  Thinking she might be safe if someone is with her while sleeping, Betsy’s friend Theny spends the night with her, but the spirit attacks Betsy anyway, and Theny is also attacked.  Theny is recapping to everyone what happened when the spirit begins to speak to everyone in a woman’s voice.  She was once happy, it says, but not now.  It then knocks everyone away and drags Betsy up the stairs and back into her bedroom.

At his wit’s end, John confronts Kate and begs for her to kill him to end the curse, but she refuses.  She says she never did place a curse on him or his family, so he must have cursed himself.  He then attempts to kill himself, but his gun misfires.  Richard, determined to find an answer to what is haunting the Bells, determines that Betsy is only attacked in her bedroom, so he proposes that she be removed from the house for her safety.  He and John Jr. attempt to take Betsy away from the house, but the spirit attacks all of them and they are forced to return.  Later, Lucy is sitting on the porch when she realizes the spirit is next to her.  The spirit enters Lucy’s mind and shows her why she is haunting them.  Betsy is being attacked in her bedroom, but not by the spirit.  John is the one assaulting her.  He raped his daughter, and he took their blood-stained clothes and buried them on the Batts’ property.

Lucy, now knowing the truth, poisons John’s medicine and watches him die.  The spirit then materializes, and it’s Betsy’s innocence that was stripped away following the rape.  It then flies away, and the story returns to 2006.  The letter, which was from Lucy to an older Betsy, concludes by saying the hauntings stopped once John was dead.  The ancestry paperwork reveal that Betsy ended up marrying Richard, and Elizabeth is her direct descendant.  Jane then tells her mother that her dad has arrived and they’re about to leave.  As Jane and her father are pulling away, Elizabeth sees the ghost of Betsy’s innocence.  She also sees the fear on Jane’s face, and then she figures out that her ex is raping their daughter.  The movie ends with more title cards.  The first one is the dictionary definition of a poltergeist, which perfectly describes what happened to Betsy.  The second one is a disclaimer that the says the events shown in this movie are just one of the theories of the Bell Witch Haunting.  The Haunting continues to be one of America’s oldest unsolved mysteries. 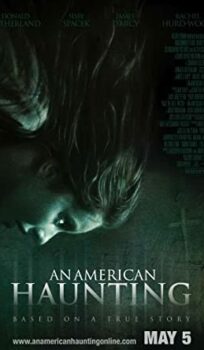