Ron’s (Will Ferrell) viral news concept makes GNN a huge success, even though he loses his team on account of an argument that stems from GNN CEO Kench Allenby (Josh Lawson) scrapping one of Brian’s (Paul Rudd) stories because it exposes poor conduct of Koala Airlines, one of Allenby’s other companies. Ron and Linda Jackson (Meagan Good) begin a relationship.

Jack Lime (James Marsden) tries to kill Ron at a celebration for GNN, but Ron only goes blind. Ron retreats to a lighthouse to live out the rest of his days. Due to the popularity of news programs on account of Ron’s success, Veronica (Christina Applegate) quits WBC and she and Ron get back together. Their son Walter is happy to have his father back. They nurse a shark named Doby back to health and release it into the ocean. Ron gets his sight back and goes back on the air. But not before being told by Veronica that his son has a piano recital. She also threatens Linda to never go near Ron again.

Ron goes on the air, but decides it would be better to be with his family. He makes a negative comment about Koala Airlines and walks off the set to go to his son’s recital. Though he is stopped by Allenby, Linda intervenes so that Ron can get out, and the two share one last kiss.

Ron is confronted by several news crews in a park, including MTV News, Entertainment News, ESPN News, BBC News, and the History Channel. Ron’s team gets away only to be confronted by Jack Lime and his crew. They are saved by Wes Mantooth (Vince Vaughn). 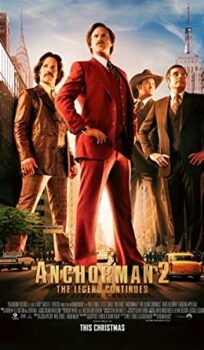