A beautiful story told in stop-motion animation about Michael Stone, a man who hears everyone speaking with the same voice (on a deeper level, it suggests that they’re all the same indistinctive people).

He flies to Cincinnati to give a conference on a popular self-help book he’s written. When he calls his wife and son, they have the same voice as everyone else.

He invites an old flame who lives in the area to meet with him but she won’t go up to his room. After showering, he hears a female voice for the first time in ages – he rushes to find her and she is Lisa, a very awkward woman with low self-esteem yet the only unique voice he’s heard in years. Michael ends up bonding with her and her travel companion, who coincidentally are there to attend his conference. He invites Lisa back to his room where she sings Cyndi Lauper and talks about how no one is usually attracted to her; they end up having sex. He has a nightmare that everybody throws themselves at him because of his fame. When he awakes, he has breakfast with Lisa and she begins to annoy him; as a result, her female voice fades in exchange for the same voice as everyone else.

He returns home and all his friends are there for a surprise party but they all blend together for him and he doesn’t recognize any of them. Lisa writes him a goodbye letter thanking him for the short amount of time they were together. 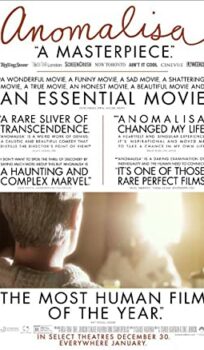