A new planet is discovered in the solar system, identical to our Earth: the same continents, countries, and people, so everyone now has a duplicate of themselves on this new planet, dubbed Earth 2.

On the eve of the discovery, Rhoda (Brit Marling), a young college-bound student, accidentally hits another car while driving drunk. The victims are a composer named John (William Mapother) and his wife and son. They both die, but he winds up in a coma. Rhoda goes to jail for four years and when released, gets a job as janitor at her former high school.

She visits John and unable to work up the nerve to tell him the truth, she passes herself off as a cleaner and starts visiting him regularly. A relationship soon blossoms between the two, doomed to fail. Rhoda meanwhile enters a contest to win a seat on the first trip to the new planet, and wins.

While celebrating, John begs her to stay behind, and she tells him the truth, that she was the one who killed his family. An enraged John throws her out of his house. Rhoda later returns and tells him of a scientist’s theory that she heard about on the radio, that the synchronicity between both worlds could be broken at the moment when one first saw Earth 2 in the sky, and since she saw it before hitting his car four years earlier, there is a chance that his family could still be alive on Earth 2. Before leaving, she gives him her ticket for the trip.

Four months later, John leaves for the new planet and Rhoda goes on with her life and job as a janitor. The final scene shows her arriving home from work to find her Earth 2 counterpart standing in her driveway. 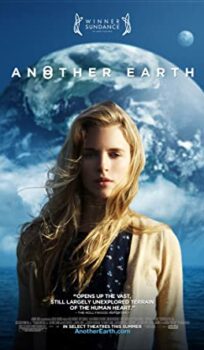