All American Boy, Colonel Kurtz (Marlon Brando), goes nuts while stationed in Cambodia during the Viet Nam war.  Since no one was supposed to know that American soldiers were in Cambodia, Captain Willard (Martin Sheen) is sent on a secret mission on a boat to locate Colonel Kurtz and take him out.  Captain Willard is slightly less crazed than Colonel Kurtz, but he still has issues; and while he has no problems wiping out a large numbers of Viet Cong soldiers and citizens, he has still has qualms about killing a psychopath like the good Colonel.  As happens in all Viet Nam war flicks, the American soldiers that Willard meet along the way like loud Rock & Roll music, take massive doses of hallucinogenic drugs, and participate in the killings of innocent civilians.  To be fair, one officer (Robert Duvall) prefers surfing, the music of Wagner, and the smell of napalm.  Willard finds Kurtz in a jungle village with a number of natives that he has trained to kill for Mom, Apple Pie and the United States of America.  For the next forty-five minutes, Kurtz has a philosophical discussion with Willard on why “If” is the middle word in “Life.”  Not being convinced, Willard puts a knife in Kurtz’ heart and orders a bombing mission to wipe out the native village.  Kurtz, while dying, utters: “The horror, the horror!”

Postscript: You will fail to appreciate this movie if you don’t understand that it is long, that Americans actually did lose the Viet Nam war, and that Francis Ford Coppola went over the budget on this boondoggle because he liked to see things explode. 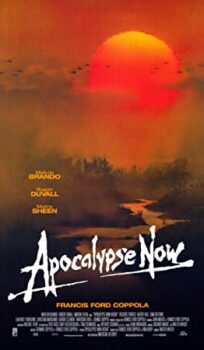