Todd Bowden (Brad Renfro) is a local high school honors student who discovers that Arthur Denker (Ian McKellen), an old man living on his block, is actually Nazi war criminal Kurt Dussander.  One day, Bowden confronts Denker and makes him an incredible offer:  instead of turning him over to the authorities, Denker will tell Todd his stories of the Holocaust.  Denker agrees and Bowden starts visiting him regularly.  Todd becomes an “apt pupil” of Denker’s horror stories, and with each story he hears, the more his personality is affected.  His grades at school begin to suffer, and he becomes more distant to his friends and family.  Because of the bad grades, Todd’s guidance counseler Mr. French (David Schwimmer) wants a meeting with Todd and his family.  Todd’s family thinks he is going to Denker’s house to read to him and doesn’t know about the stories or Denker’s real identity.  Denker goes to the school, pretending to be Todd’s grandfather, and lets French know that he will help Todd get his grades up.

Meanwhile, Denker’s personality is changing as well.  He suppressed his Nazi memories when he fled to the US after the war, but talking about the Holocaust is churning up all those old feelings again.  He tries to put a stray cat into his oven, but it escapes.  Later, he is wearing a Nazi SS Officer uniform that Todd had bought for him.  A bum who is going through Denker’s trash sees him through a window wearing the uniform just as he sees the bum looking through the window.  Later, Denker let’s the bum into his house, and tries to kill him.  But before he can finish him off, Denker suffers a heart attack and calls Todd.  Todd comes over and, with little remorse, kills the bum and covers it up.  Once all of the evidence of the murder is gone, Todd calls for an ambulance.

While recovering in the hospital, Denker’s hospital roommate (a former concentration camp survivor) recognizes him as Dussander.  He calls the authorities, and it sparks a media frenzy.  During the investigation, the police discover the body of the bum buried in the basement.  They question Todd what happened that night, and he tells them that he was called over to read a letter Denker had received that day.  Despite not finding that letter, the police let Todd go.  Once Denker realizes that he will be sent to Israel to face trial for his war crimes, he commits suicide.  With his death, the police close the investigation.

A few weeks later, his grades now good again, Todd graduates as Valedictorian.  Shortly thereafter, Mr. French goes to Todd’s house to confront him about Denker impersonating Todd’s grandfather.  Todd tells French that if he tells his parents what happened, he will go to the authorities and tell them that French attempted to sexually assault him.  Even though the both of them know that never happened, the scandal that would result from the allegation would ruin his life and career.  French leaves the house, and Todd has now gotten away with everything. 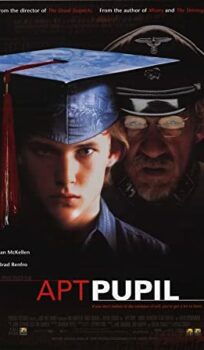