The ATHF builds the Insanoflex, a deadly exercise machine, and Carl becomes trapped on it as it morphs into a giant robot that smashes through the city to a dance song.  Shake inevitably brings it down with the help of an acoustic guitar and his song “Nude Love”.  (The robot essentially bashes its own head in.)  However, it’s laid quite a few eggs, and soon smaller Insanoflexes are trashing the city.

The ATHF then returns to Dr. Weird’s hideout, where it’s revealed that he has brought them to life, along with a fourth member named Chicken Bittle (voiced by Bruce Campbell).  Sadly, Bittle is devoured upon the team’s visit to Africa, so they go to New Jersey and inhabit a run-down house instead.

Weird has ambushed a muscle-bound Carl (free from the machine) and sliced off all of his muscles, attaching them to himself for a big fight.  He and Frylock duke it out until he’s eventually cut in half.  The movie then gets even more confusing at this point, as Frylock is not only revealed to be Dr. Weird’s father, but…a woman trapped in a man’s body.  An observer, Walter Melon, then drops by to reveal that he’s behind the Insanoflexes, in a bid to create a super-gym on the planet Earth.  He’s talked out of it when residential zoning rules are discussed.

After the credits, the Ghost of Christmas Past From the Future humps the TV.  A sex-changed Frylock comes out to inform him it’s time for bed. 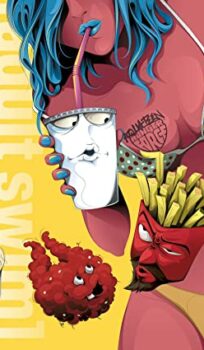