Jim Baxford (Dominic Purcell) is happily married to Rosie (Erin Karpluk), who is fighting cancer. Her treatments are very expensive and his insurance from his security guard job is not covering her medical bills. He starts having to pay for her treatments with credit cards and this process quickly snowballs into serious debt. However, Jim feels secure knowing he has plenty of money invested in the stock market, but, the market crashes and he and everyone else loses everything.

Mr. Stancroft (John Heard) a Wall Street executive is shown during the movie forcing his brokers to make bad investments with peoples money to ensure he and his company make money while robbing others.

Jim quickly goes broke paying for his wife’s treatments. He is told by the bank that he will lose his home in 30 days, and is fired from his job because debt collectors are calling his work, and since it’s his job to deliver money to and from banks, they have to fire him, because he is a liability. He comes home from work to find that his wife has slit her wrists, killing herself to save him from anymore financial problems.

In the end, Jim’s careful planning pays off and he walks away from the mass shooting he just committed without being caught. His narration tells us he will move on and continue to fight the system. 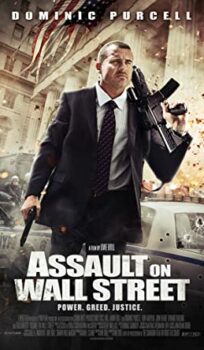