Pooper:
Karim recovers in both body and spirit thanks to the love of his family and friends. The film ends with him happily returning to the ostrich farm.

Karim is fired from his job on an ostrich farm after one of the ostriches manages to escape during his shift. Though Karim searches the mountains for the bird, and finds many of its eggs, he never manages to recover it. At the same time, Haneyah’s hearing aid is broken when it falls into a cesspool where Hossein and his friends are playing. Haneyah can’t hear without the device and Karim doesn’t have the money to buy a new one. Hossein explains that he and his friends were at the cesspool because they intend to clean it out, stock it with fresh water and fish, and then sell the fish for millions of dollars. Karim forbids his son from pursuing this scheme any further. Despite the misfortune, Karim still makes sure to share what food his family has with his neighbors.

He visits Tehran on his motorcycle to see if he can get the hearing aid repaired. While there, he is mistaken for a taxi driver and begins transporting people around town. Karim realizes he can make much more money as a taxi driver than he did on the ostrich farm. Additionally, he finds that he can salvage various scrap and junk in the City to improve his home (taking discarded TV antennas, doors, and window frames). He can even make enough money to repay their debts, place money into savings, and eventually buy Haneyah a new hearing aid.

However, Karim’s newfound fortune begins changing him. He hoards the materials he salvages rather than sharing it with his neighbors. Karim is no longer carefree and humble. He berates and beats Hussein for continuing to pursue his dream of raising fish and cleaning out the cesspool and Haneyah for talking to a boy. Karim considers stealing a refrigerator and never buys his daughter the hearing aid. Nargess cries at how he’s changed.

One day, while Karim is standing atop his mountainous pile of salvaged materials, it collapses. He is nearly killed in the fall and left with a broken leg. To his surprise, his neighbors graciously care for him and bring him to the doctor in the city. His family also rallies around him, lifting his spirits and taking on jobs to make up for the loss of his salary. He watches as they distribute his materials to their neighbors. During a doctor appointment in Tehran, Karim finds out that Hussein and his friends have been working and saved enough money to not only support the family but buy some fish for their completed freshwater pond.

On the way home, however, the barrel with the kids’ fish springs a leak and the fish fall onto a sidewalk. The boys tearfully save the fish by scooping them into a nearby gutter so that they can swim into the sewers. Finally realizing how he lost his way through his anger and pride, Karim cheers up Hussein and the boys and encourages them to pursue their dreams despite the setback. The boys put their one remaining fish into the pond they made. The next morning, Karim frees a sparrow trapped in their house. One of his neighbors arrives and tells Karim that the lost ostrich returned to the farm (implying he may be able to get his old job back). The film ends with a smiling Karim watching the ostriches he loves so much. 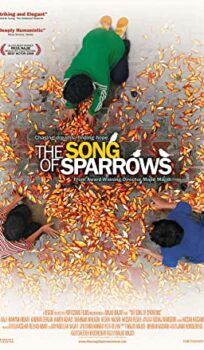