Sisters Philippa and Martina, turn down a chance to leave their Danish town to be with men who love them, and stay instead to care for their aging pastor father and his small church. Thirty-five years later, a French woman, Babette, a famous French chef seeks refuge and Philippa and Martina take her in after reading a letter from her French friend and high official, whom the sisters respect.

For many years, this famous chef is reduced to preparing meals of plain boiled potatoes and dried meat because the region bore little farming capabilities and because of the religious beliefs of this particularly isolated sect in a desolate northern Scandinavian village where anything other than plain food, clothing, activities, is never to be enjoyed.

Babette wins a French lottery (a ticket is purchased for her each year by an old friend in France), and discloses her secret that she is a famous world chef from France. She begs the community to allow her to prepare a feast in gratitude for their taking her in.  The major portion of the film immediately wraps one up in Babette’s setting up of the opulent occasion, from purchase of the food, to the intricate and incredibly exquisite preparation of the feast.  The enchanted event is attended by the sisters two suitors of old, Babette’s French friend, and the village, and following dinner, there is much joy and dancing outside in the snow.

The story exemplifies how shared happiness, laughter and simple pleasures can infuse joy into every soul. 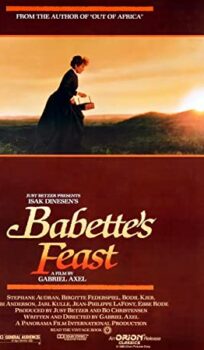