SHORT VERSION:
After her henchmen fail to kidnap Sly from Toddlers’ Hall, Dr. Kinder orders Dr. Heep to have the laboratory stripped of everything and prepare it, Whit, and the other babies for a move to Liechtenstein before Dan and Robin find out that they have Sly and she has Whit and send the cops after her. Whit communicates this development to Sly via telepathy, so while Dan and Robin are away, Sly hypnotizes Lenny to drive him and the babies at Toddlers’ Hall to Babyco so they can stop Kinder and save the babies there. Carrie later communicates to Dan the situation regarding Sly, Whit, and the evil goings-on at Babyco, so he and Robin head there, with Carrie promising Dan that she will tell him the secrets of life when he returns. Along the way, Robin calls the cops and gets them to come to Babyco by threatening to blow the place up.

Sly and his crew stop Kinder, Heep, and their henchmen as they are leaving with Whit and the others, and they draw them into Joyworld and subdue Heep and the henchmen. However, Kinder escapes with Whit up to the roof where her helicopter is waiting. Dan and Robin then show up and are told by Basil where Kinder and Whit are, so they go up there and save Whit and restrain Kinder just as the police show up. Kinder and her staff are arrested, and Sly and Whit “cross over,” where they cease being baby geniuses and become ordinary people.

Dan and Robin adopt Sly, and when Dan asks Carrie about what the secrets of life are, she just gives him a sly smile, essentially telling him that adults are not supposed to know about them.

LONG VERSION:
Dr. Kinder (Kathleen Turner) and Dr. Heep (Christopher Lloyd) soon find out that the baby they think is Sly (Gerry, Leo & Myles Fitzgerald) is actually Whit (Gerry, Leo & Myles Fitzgerald), and though Kinder is initially incensed, her attitude changes to excitement when she realizes that an opportunity has been presented for a living cross-evaluation of the twins (to see if her method of child rearing is indeed superior to that of her niece Robin [Kim Cattrall]). As she goes to visit Robin – since she has Sly but thinks he is Whit – she tells Heep and her staff to begin comparative tests on Whit.

While visiting Robin and Dan (Peter MacNicol) at Toddler’s Hall, Dan mentions that he has had successful communication with “Whit” in pre-language talk, so Kinder suggests bringing “Whit” to her lab so they can achieve some breakthroughs with his gift and her technology. Sly manages to communicate to Peter to not allow it and that Kinder has Whit. Kinder then leaves without taking Sly with her, and Robin suspects that she is up to something. Kinder soon phones Heep and tells him to send two of their best men to Toddler’s Hall to kidnap Sly, explaining that they must have both brothers because Dan is beginning to understand them, and if he fully does, then he and Robin will eventually learn that they have kidnapped Whit and will send the police after them, and the police will no doubt search Babyco and find their laboratory and have them both put in prison.

After the two goons fail to get Sly, Kinder phones up Heep again and orders the lab to be stripped of everything, planning to move it to Liechtenstein and take Whit and the other baby geniuses there with them before Dan and Robin can discover the truth. As the lab is being packed up, Whit communicates to Sly via telepathy about what Kinder is doing now, and Sly communicates back that he and the other babies at Toddler’s Hall will be coming to help. To that end, Sly hypnotizes the bus driver Lenny (Dom DeLuise) to take him and the babies to Babyco when it is time to take them back to their homes for the day, but Carrie (Megan & Gabrielle Robbins) remains behind, saying that she has a job to do here.

When Dan and Robin return home after a visit to the bank (where they get approved for a loan to keep Toddler’s Hall in business), they receive calls from the toddlers’ parents inquiring about why their children haven’t gotten home yet, so they call up Lenny on the bus, who tells them that they are going to Babyco for an important errand. After Dan wonders why they are going there, Carrie comes up to him and manages to get him to understand and communicate with her, telling him about how Sly is Whit’s brother and has been with them for the last two days, and how Kinder has a lab at Babyco that she is getting rid of and will be taking Whit and the other babies to Liechtenstein with her. After Carrie promises Dan that she will later tell him all of the secrets of life that babies know, they drive off to Babyco. They call 911 along the way, and Robin gives the police an incentive to go there by telling them that she plans to destroy the place with a bomb.

Sly and company stop Kinder and her entourage before they can leave with the babies, and they draw them all into the Joyworld amusement park. There, Sly enters the command center and gains control over the park’s robo-entertainers while Whit and the other babies get free, and all of the babies assist Sly in using the entertainers to subdue Heep and the henchmen. However, Sly watches helplessly as Kinder snatches Whit and takes him up to the roof where her helicopter is waiting for her. As Sly rejoins the babies, he feels himself beginning to “cross over,” having now reached the age of two. Dan and Robin then appear, and Basil (Connor & Griffin Leggett) communicates to Dan that Kinder is on the roof.

Dan and Robin get up there just after Kinder has Whit taken aboard the helicopter and is trying to climb a rope ladder up to it, and after Dan tries and fails to pull Kinder down, Robin succeeds at this just as the cops show up. She orders Kinder to confess to her wrongdoings, and Kinder proceeds to admit that she is not her aunt like she always believed, for her mother adopted her when she was two years old. Relieved at this news, Robin punches her and knocks her out. She then reclaims Whit, and Whit soon comes over to Sly, who has been assisted up to the roof by Basil and Lexi (Breanna & Brittany McConnell). Sly says that he is crossing over, and Whit admits that he is also (they are twins, after all).

Dan and Robin adopt Sly, but Dan is dismayed at how he cannot learn the secrets of life from the boys now that they have lost their baby genius knowledge and have become ordinary people. He then remembers Carrie, for she hasn’t crossed over yet, but when he asks her, the only answer she gives him is a sly smile, essentially telling him that adults aren’t supposed to know about such things. 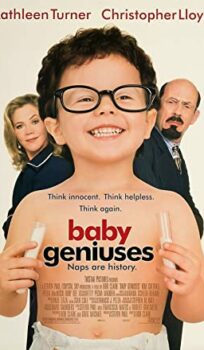