Frank (Danny Trejo) and Bernie (Danny Glover) confront Manny’s (Jeremy Ray Valdez) killer Adolfo (Ignacio Serrichio) in his mansion, and after Frank stabs Adolfo in his right eye with an ice pick that Adolfo was about to use on him, Adolfo screams that his father, Leandro (Andrew Divoff), ordered him to carry out the hit. Frank demands to know where he is, and Adolfo replies that he is at the Argentinian consulate. Bernie advises Frank against going there due to the fact that consulates have a lot of security, so Frank forces Adolfo to text his father and tell him to meet him at the Biltmore Hotel. Frank and Bernie go there and find Leandro sitting in the restaurant, and Frank uses his status as an honorary police officer to arrest him. He reports his success to Manny’s mother Rosaria (Jacqueline Obradors) and little sister Julia (Melany Ochoa), and he spends the night celebrating with them. Later that night, he and Rosaria almost kiss, but they are interrupted by Bernie getting a midnight snack from the fridge.

The next day, Officer Malark (Patrick Fabian) pays Frank a visit and informs him that Leandro has been released because he has diplomatic immunity, and he also tells him that he needs to obtain irrefutable proof that Leandro is a drug dealer and a murderer if he ever hopes to have him put in prison for a long time. Later on, Frank and Bernie get a taxi and have it follow Leandro as he leaves the Argentinian consulate, hoping that he will go somewhere where they can procure the proof they need. They tail him all the way to a meat packing plant that he owns, and they go inside and sneak into one of the rooms, where they discover that Leandro has been smuggling his drugs in the meat packages. Unfortunately, two of Leandro’s men then find them and capture them. After they are tied up and hung on a rack inside one of the meat lockers, Leandro comes in and first gloats about how untouchable he believes himself to be before telling them that he had Manny killed because he stole from him, and he then tells Frank that he must pay for maiming Adolfo and earlier destroying $250,000 worth of his drugs. He informs Frank that he knows that he has gotten close with Rosaria, and then he receives a text from Adolfo saying that he and his men are on their way to her house. Before Leandro takes his leave, he orders the men who captured the duo to set the locker’s temperature to three degrees Fahrenheit, intending to have Frank and Bernie slowly freeze to death. Meanwhile, Adolfo’s men break into Rosaria’s home, kidnap her, and put her in Adolfo’s car, and while driving off for elsewhere, Adolfo tells her that he will sell her somewhere abroad as a sex slave. Julia thankfully avoids capture by hiding in the secret nook Frank built for her in her bedroom closet.

Frank is able to cut off the ropes binding his hands by using the charms on a bracelet Julia had given him (the cold having made them razor sharp), and then he unties Bernie. They then make noise to bring the two goons that caught them into the locker, after which they trip them and knock them out. Before leaving, Frank pockets one of the goons’ grenades. They hurry over to Rosaria’s house and find Julia safe and sound, and she fills them in on her mother’s kidnapping before showing them that they can track her through the family finder app on Frank’s phone, which is linked with her phone. Frank leaves Julia at her neighbor’s house for safekeeping, but then notices that the cab that he and Bernie were still using has now left since neither have any cash left on them. Thankfully, Frank’s boxing student Tucson (Leon Thomas III) appears in Bernie’s truck, having managed to repair it, and Frank and Bernie take off in it towards the San Gabriel Mountains since the app has located Rosaria’s phone there. Meanwhile, one of the two goons at the meat plant warns Adolfo via text message that Frank and Bernie have escaped and will likely come for him now, so Adolfo tells his driver that they need to find the duo before they find them, then has the driver summon a helicopter piloted by another one of his thugs to back him up.

The helicopter finds Bernie’s truck and its gunman opens fire on it, forcing Frank and Bernie to drive wildly through the wilderness to try to lose it. After the chopper finds them again, Frank manages to destroy it when he takes out the grenade and tosses it behind the truck and into the chopper when it flies in low. The duo then get back onto the main road and catch up to Adolfo’s car, and Frank forces the driver to pull over by throwing a knife into his left hand. Shortly after he has stopped, Frank reaches in through the sun roof and knocks his and Adolfo’s heads together to daze them. Frank then checks out the car and discovers that Rosaria’s phone is in the back seat but she isn’t, so he threatens Adolfo with taking out his other eye in order to get him to confess that his father now has Rosaria. Frank calls up Leandro on Adolfo’s phone and lets him know that he has Adolfo, then tells him to bring Rosaria to the Elysian Park helipad in one hour so he can trade her for his son.

Frank and Bernie meet Leandro and make the exchange, but just after Frank removes Rosaria’s mouth gag, she warns him that one of Leandro’s henchmen is in the back of the van she came in. Sure enough, the henchman rolls out with a machine gun and takes aim at Frank, but Bernie kills him first using an old revolver he had been keeping in his truck’s glove compartment. Moments later, Frank and Leandro start slugging it out, and as they do so, a couple dozen more henchmen arrive and aim their guns at the protagonists. Frank eventually gets the better of Leandro and whups his butt, and Leandro weakly asks for someone to call an ambulance for him. Just as Leandro’s goons make ready to shoot Frank and the others, Malark shows up with several cruisers full of cops as well as a helicopter, thanks to Frank having texted him before the showdown requesting his help. One of the policemen checks on Leandro and discovers that he has just died from the beating he took, and Bernie excitedly tells the cops to get Leandro on ice, since he needs a new liver to stay alive and Leandro won’t be needing his anymore.

Some nights later, Frank and Rosaria are seen tucking Julia into bed, and Julia asks her mother if there is a way that Frank can stay with them for good. As Frank and Rosaria enjoy some beers alone, Rosaria tells him that she likes Julia’s idea, at least until his community center is up and running again (which Adolfo’s men earlier destroyed with a bomb in a failed attempt to assassinate Frank and Bernie) and Bernie recovers from his successful liver transplant, but she admits that she wouldn’t mind it if he decided to stay longer. They then move in for another kiss, but they are once again interrupted by Bernie raiding the fridge. However, he is soon joined by Jessica (Sarah Dumont), a lovely college girl he got acquainted with during his and Frank’s investigation who is now his “nurse”, and she entices him back into his bedroom. 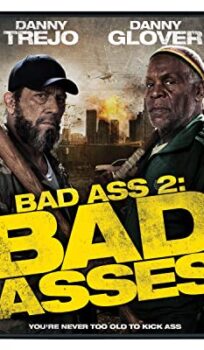