Cynthia (Jennifer Rubin) is the lone survivor of a mass suicide perpetrated by the cult she was a part of.  She wakes from a coma in a mental institution, and is quickly haunted by the ghost of the cult leader (Richard Lynch), who is angry that she escaped death and will not join him in the afterlife.  When her fellow patients start dying in apparent suicides, Cynthia is convinced that he is responsible, and will not stop his killing spree until she takes her own life as had been intended.

Dr. Berrisford (Harris Yulin) fires Alex (Bruce Abbott) when he tries to defy Berrisford’s orders regarding Cynthia’s treatment and protection in light of her fellow patients ‘suicides’.  Feeling angry, Alex takes one of the relaxants that are part of Cynthia’s medical regimen to calm himself down … and ends up having a wild nightmare in the parking lot.  He visits the doctor in charge of the pharmacy and discovers that something is screwy with all of the pills that were being given to Cynthia and the other members of her group.  Berrisford has been plying them with drugs that will exacerbate their conditions instead of making them better because he can only prove his thesis if his patient’s mental states continue to decline.  This directly led to all of the suicides.  Cynthia has been imagining her sightings of the cult leader because Berrisford has been giving her a potent hallucinogen.

Alex finds Cynthia on the roof, where Berrisford has led her by pretending to be the ghost of the cult leader and is talking her into a plunge to the pavement below.  Cynthia jumps, but Alex manages to catch her at the last second and attempts to pull her back up.  Berrisford tries to push the defenseless Alex and Cynthia over the edge, but the police that Alex had notified arrive on the roof and pull them to safety.  Berrisford tries to convince the police that Alex was the one responsible for the deaths, but Cynthia (under the influence of the hallucinogen) pushes him off of the roof to his death, still thinking that he was the cult leader.

It is implied that Alex explains what really happened to the police, and that he and Cynthia will give in to their sexual tension and live happily ever after. 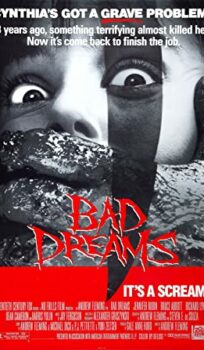