Matt (Ross Partridge), Chad (Steve Zissis), Michelle (Greta Gerwig), and Catherine (Elise Muller) try to walk from the cabin to the road, but encounter the man with the bag on his head after night falls. The Baghead stabs Matt, and Chad runs into the road in terror, only to be struck by a passing truck. Their pursuer rips the bag off his head, revealing it is Jett Garner, the indie director from the opening of the film. Turns out, Matt had called Jett to pose as the Baghead and film the friends’ reactions in order to make a “real” horror movie. Matt’s “stabbing” was merely another prank.

Later in Chad’s hospital room, Matt tearfully apologizes for the stunt and insists he will never show anyone the footage, but Chad thinks it is hilarious, and insists on entering it in film festivals.

(Note: there is still some question of whether or not the first Baghead sitings were real, since Matt didn’t call Jett until after Chad and Catherine’s car battery prank). 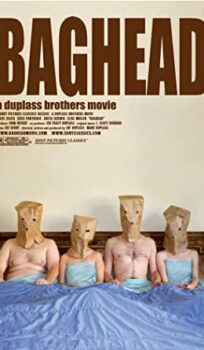