Tess Marshall (Georgina Campbell) arrives at 467 Barbary Street to stay at an Airbnb, only to find it has been double booked with another man named Keith Toshko (Bill Skarsgard). Tess stays the night but quickly discovers a sinister presence lurking in the house since there is a hidden tunnel in the basement. Keith ends up down there and is killed by a humanoid monstrosity known as “The Mother.”

A screenwriter, AJ Gilbride (Justin Long), who is facing rape allegations, goes to the same house since he is already renting it. He ends up in a pit in the basement along with Tess, as The Mother treats her victims like her babies. While Tess plays along, AJ is less willing. Tess is able to escape, but she gets no help from the police, so she waits until it’s dark to go back into the house to help free AJ.

AJ discovers a man named Frank (Richard Brake), who is The Mother’s father, bedridden and close to death. After seeing evidence of Frank’s crimes in videotapes, Frank shoots himself in the head. Tess finds AJ, but he accidentally shoots her in the abdomen. They run from The Mother and find a homeless man, Andre, who earlier warned Tess about being in the house. He explains that The Mother is a product of incest since Frank kidnapped and raped women and then raped the children, which is why The Mother is what she is. She shows up and kills Andre before chasing Tess and AJ up a water tower.

AJ makes an attempt to save his own skin by throwing Tess off the tower, knowing The Mother will instinctively try to protect her. It doesn’t kill her, and The Mother splits AJ’s skull in two. Tess grabs the gun and has a look of sadness on her face before she kills The Mother, and then leaves to get help. 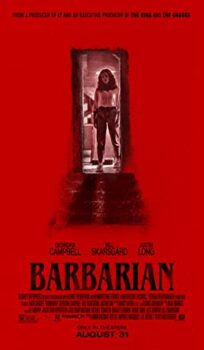