Pooper:
Andrea is the phantasm, and she is getting revenge for her father’s murder. She disappears with Joker as Joker’s hideout explodes (Joker’s fate is unrevealed). Batman survives the explosions and devotes himself full time to crimefighting while Andrea sails away from Gotham City forever.

Long Ending:
The film begins with Batman (voiced by Kevin Conroy) attacking a bunch of mafia members who are concocting a scheme to launder counterfeit money through Gotham City casinos. Their leader, Chuckie Sol, flees to the parking lot while Batman fights Chuckie’s underlings. Chuckie believes he has escaped, but is confronted by a masked figure called the Phantasm (Stacy Keach). Chuckie is killed in the confrontation, and onlookers assume that Batman killed him when they see him surveying the wreckage. A few days later, and the Phantasm also kills mob boss Buzz Bronski, who was an old associate of Chuckie Sol. The Gotham City police force is ordered by politician Arthur Reeves (Hart Bochner) to bring in Batman, dead or alive.

We jump back in time to watch Bruce Wayne (who is Batman) going out for the first time to fight crime (dressed in a ninja-type outfit). Wayne is reckless, but successful. He tells his faithful butler Alfred (Efrem Zimbalist, Jr.) that he needs to come up with a way to scare the villains he attacks so they aren’t as aggressive to him. Later that day, Bruce visits his parents grave and meets a woman named Andrea Beaumont (Dana Delaney) who is visiting her mother’s gravesite. The two eventually strike up a romance and Bruce begins considering whether to settle down with Andrea rather than pursuing crimefighting.

Back in the modern day, Andrea returns to Gotham City and begins dating Arthur, a former associate of her father. Batman asks what happened to her dad, who he suspects may be the Phantasm (and it is revealed that Andrea knows Batman is Bruce Wayne). She refuses to tell him. Meanwhile, another mob boss/associate of Chuckie and Buzz named Salvatore Valestra (Abe Vigoda) realizes that “Batman” may be after him next. He approaches Arthur for protection, but is rebuffed. Feeling he has no other choice, Salvatore approaches the Joker (Mark Hamill) and asks Joker to kill Batman for him. Joker cackles and says he will take care of the situation. That night, the Phantasm appears at Salvatore’s home to find that the Joker killed Salvatore and rigged his body with explosives and a video camera. Phantasm escapes as Joker detonates the explosives, but now the Joker is aware of the Phantasm’s existence.

Cutting back to the past, Bruce and Andrea go on a date to a world’s fair type of exhibit showing a pristine vision of the future (and includes a car that inspires Bruce’s designs for the Batmobile). Afterwards, Bruce meets Andrea’s father, who has dealings with Salvatore, Chuckie, and Buzz. Later, Bruce asks his parents’ spirits if he can abandon his vow to end crime in order to be with Andrea. Alfred tells Bruce they would want him to be happy and so he proposes. The next day, however, Bruce receives the engagement ring back in the mail with a letter from Andrea saying she has changed her mind and went to Europe with her dad.

In the present, the Joker attacks Arthur, believing him to be involved with the Phantasm. Batman visits Arthur in the hospital and interrogates him. He learns that Andrea and her father fled Gotham City because they owed money to the mobsters and couldn’t pay. The confided their location to Arthur, who eventually sold the location to the mob in exchange for campaign contributions. Later that night, Andrea shows up at Bruce’s manor and the two share a night of passion. She tells Bruce that her father has in fact returned to take revenge on all those who wronged him as once they were found, the mobsters demanded even more. Bruce looks at a picture of all the past associates and deduces that the final associate was… the Joker (before he turned into the Joker).

The Phantasm appears at Joker’s hideout (which is the former world’s fair exhibit showing the future, now decrepit and turned into a park full of deadly traps by the Joker). The pair fight. Joker gets the upper hand and pulls off the Phantasm’s mask to reveal that the Phantasm is… Andrea. Batman arrives just in time to stop Joker from killing Andrea. Andrea states that when the mob located them, Joker was sent to kill her father even though he had repaid his debt. Andrea is there to take revenge. Batman asks her to leave and argues that killing Joker is not the way to get justice. Andrea appears to leave and Batman fights Joker. Joker eventually detonates explosives located in tunnels beneath the park. Andrea returns and grabs Joker, disappearing with him as the explosions draw closer. Batman just barely escapes with his life.

The film ends with Batman finding a locket with Andrea and his picture in it that she hid in the batcave (symbolizing that she will not be returning). Realizing they will never be together, Batman drives off into the night to protect Gotham City. Andrea is seen on a boat sailing out of Gotham City, telling a fellow bystander that she is “alone.” 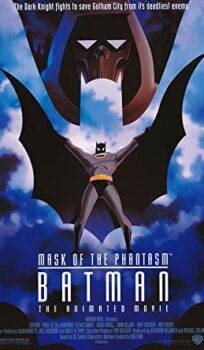